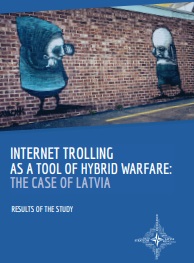 Author(s): Alexander Fokin
Subject(s): Politics, Media studies, Geography, Regional studies, Communication studies, Security and defense, Military policy, Social psychology and group interaction, Methodology and research technology, ICT Information and Communications Technologies
Published by: NATO Strategic Communications Centre of Excellence
Keywords: Russia; media; internet; information; communication; trolling; tool; hybrid warfare; Latvia; case study;
Summary/Abstract: Social media has been used increasingly to support military actions. Recent conflicts have demonstrated that the fight for hearts and minds is as important as kinetic activity, and social media plays a crucial role in this process. Both state and non-state actors effectively exploit social media to gain support for their actions, recruit new members, deceive and intimidate the adversary, and even use it for traditional military activities such as intelligence collection or command and control. Given these conditions, the NATO Strategic Communication Centre of Excellence (NATO StratCom COE) was tasked to conduct a study on how social media can be used as a weapon of hybrid warfare. The recent Russian-Ukrainian conflict demonstrated how fake identities and accounts were used to disseminate narratives through social media, blogs, and web commentaries in order to manipulate, harass, or deceive opponents. Several reports by investigative journalists have reported about the existence of so called troll farms in Russian cities, employing people to spread disinformation, rumours, or falsified facts, enter into discussions and flood topic-related web spaces with their own messages or abuse. Nevertheless, trolling is still a relatively unexplored phenomenon. Although such activities have been widely identified, their effects have not been measured, particularly due to the fact that is it difficult to distinguish between the paid trolls and people who are simply expressing their opinions. In order to analyse how pro-Russian trolling is used to influence the public opinion in NATOmember countries the NATO StratCom COE commissioned the study Internet Trolling as a Tool of Hybrid Warfare: the Case of Latvia. The study was conducted by the Latvian Institute of International Affairs in cooperation with Riga Stradins University, and was aimed at analysing organised proRussian trolling in internet media to measure its impact on public opinion in Latvia. Latvia was chosen for the case study due to the specifics of its information environment (a strong division between the Latvian and Russian language information spaces), as well as the country’s historical background and potentially vulnerability to Russian hybrid warfare tactics. Communication science, social anthropology, political science, and information technology expertise was employed to gain a better understanding of the trolling phenomenon, and to develop methods to identify trolling and evaluate its impact on public opinion. Both quantitative and qualitative research methods were used. This research provides an opportunity to evaluate the risk potential of trolling, and it offers recommendations on how to mitigate the effects of trolling when used as a tool in hybrid warfare, beyond the specific case study.