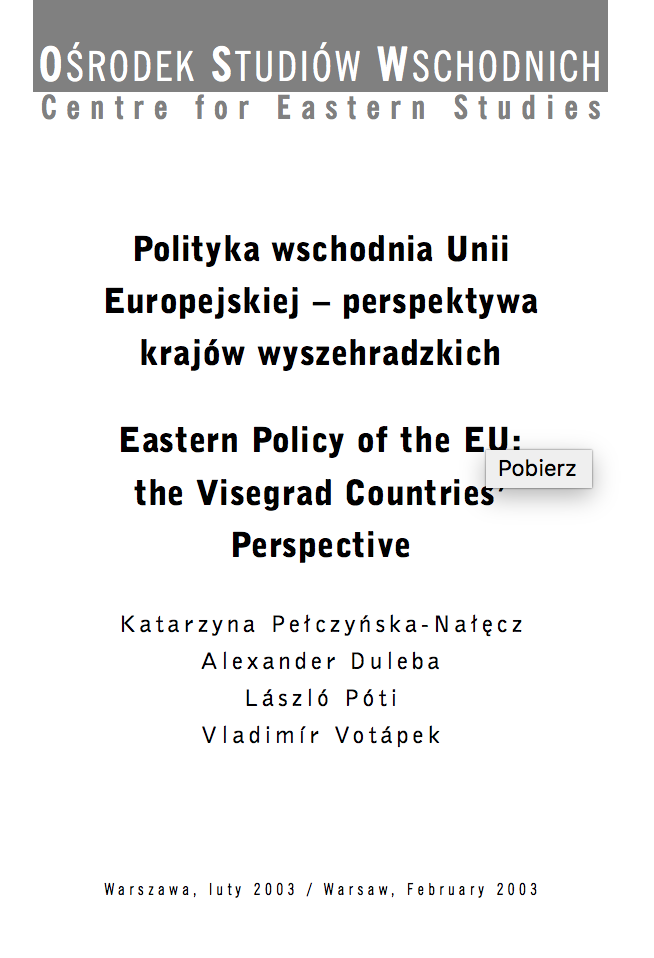 Author(s): Katarzyna Pełczyńska-Nałęcz
Subject(s): Governance, International relations/trade, Developing nations, EU-Accession / EU-DEvelopment, Geopolitics
Published by: Ośrodek Studiów Wschodnich im. Marka Karpia
Keywords: Eastern Policy of the EU; Visegrad Countries
Summary/Abstract: 1. After its enlargement, scheduled for 2004, the European Union will face a completely new situation at its eastern borders. This new situation calls for a new concept of the EU eastern activities, i.e. for development of the new Eastern Policy of the EU.2. Due to a number of specific features such as geographical location, closeness of ties, direct risk factors etc., the Visegrad countries will and should be particularly interested in the process of formulating the new EU Eastern Policy. Consequently, they should be the co-makers of this policy.3. The new EU Eastern Policy should differ fundamentally from the Union's traditional eastern relations. Firstly, its scope should not cover the entire CIS area: instead, the policy should focus on some of the European successor states of the former Soviet Union, namely Belarus, Russia and Ukraine, as well as Moldova, following the accession of Romania. It does not seem advisable to exclude the Russian Federation from this policy and to develop and implement a separate policy towards it. The new Eastern Policy should be an autonomous component and one of the most important elements in the overall foreign policy of the EU.4. Secondly, the new Eastern Policy should be founded on the following two pillars: a region-oriented strategy, which could be called the Eastern Dimension, and reshaped strategies for individual countries. The Eastern Dimension should set up a universal framework of co-operation, defining its basic mechanisms and objectives. These should include: the adaptation assistance programme, JHA, transborder co-operation, social dialogue and transport infrastructures. The approach, however, should be kept flexible, taking into account the specific situation of each country. This purpose should be served by keeping in place the existing bilateral institutional contacts between the EU and each of its eastern neighbours, and by developing a national strategy for each neighbour.