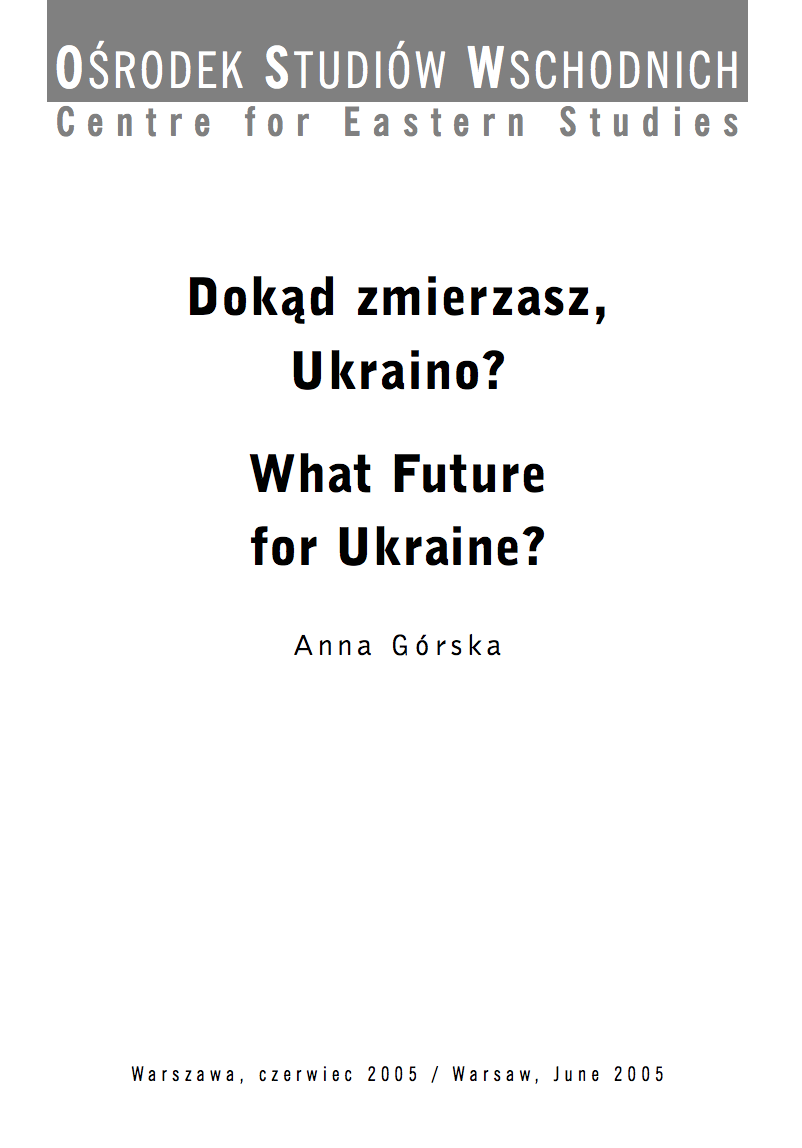 Author(s): Anna Górska
Subject(s): Politics, Governance, Geopolitics
Published by: Ośrodek Studiów Wschodnich im. Marka Karpia
Keywords: Ukraine
Summary/Abstract: One hundred days after the inauguration of the Ukrainian president Viktor Yushchenko and the appointment of the new government led by Yulia Tymoshenko it is traditionally the time for first reviews and assessments of the new authorities' policy. In the case of Ukraine, this is particularly interesting. The regime change occurred largely as a result of an anti-system public protest known as the orange revolution. However, Maydan did not principally formulate any positive programme. Rather, it vocally protested against what the society no longer accepted - lawlessness of the authorities, corruption, poverty, lies in highest offices and the media, and disregard for the society which the leaders only remembered during electoral campaigns but still refused to respect the voters' will. Hence, the principal challenge for the new authorities should be to reshape the system which Leonid Kuchma continued building for years as a kind of symbiosis between political and business groups and the bureaucracy. Yushchenko's pre-election declarations, the presentation of his programme and the choice of European integration as the strategic objective, which the president repeatedly declared in his speeches both in Ukraine and during his many foreign visits, all these indicate that the system reconstruction is meant to lead to the creation of a democratic state of law and a market economy. In the period in question, the new authorities' policy was focused on dismantling the system created by the former regime and on wide-scale replacements of officials, struggle against corruption and implementation of the social promises made during the campaign. This could be regarded as preparation for the implementation of the principal objectives concerning the creation of a new Ukraine, but in fact the government is largely motivated by the short-term goal of next year's parliamentary elections. The measures that have been taken are arguably justified but it is Orange was the campaign colour of Viktor Yushchenko. Another term used to refer to the upheaval is Maydan, standing for Independence Square (Maydan Nezalezhnosti), the main square in Kyiv where the several-weeks long protest was staged. obvious that the new political style and the manner of operation of the new authorities are often reminiscent of the previous regime. Particularly difficult to accept are practices such as the use of law to one's own ends and behind-the-scenes bargaining over appointments and competencies of officials. This is due to the fact that the new authorities include many people who held high state offices in various periods of Leonid Kuchma's presidency. The old habits and attitudes, sometimes combined with involvement in various political-business arrangements, adversely affect the quality of politics. Economic policy suffers most because of the absence of a strategy for social and economic development, programme and ideological differences among the new leaders, and, to some extent, the "legacy" of the previous authorities. The problems that emerged already in the first months suggest that the transformation process in Ukraine is going to be difficult, long, and susceptible to various distortions, and that the principal reforms will only be undertaken after the parliamentary election of March 2006.