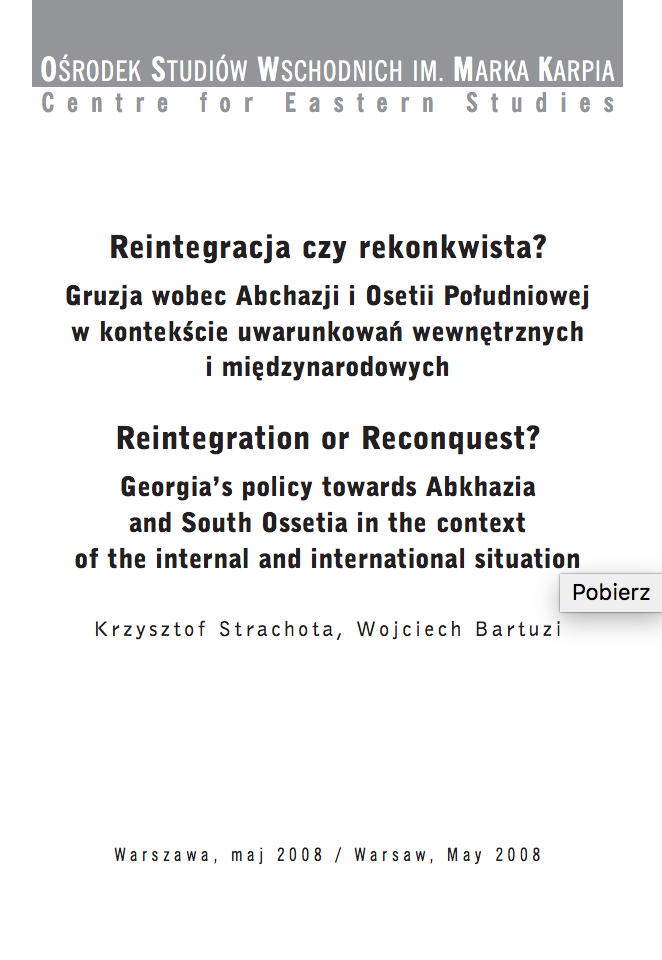 Author(s): Wojciech Bartuzi, Krzysztof Strachota
Subject(s): International relations/trade, Geopolitics
Published by: Ośrodek Studiów Wschodnich im. Marka Karpia
Keywords: Georgia; Abkhazia; South Ossetia
Summary/Abstract: 1. The conflicts in Abkhazia and South Ossetia have been Georgia's main security problem since the beginning of the 1990s, and, along with the Armenian-Azeri conflict over Nagorno-Karabakh, have made up the main security problems in the South Caucasus.2. In the 1990s, the conflicts in the South Caucasus remained in abeyance. This situation sprung from the apparent self-determination (albeit gained through military means) of the self-declared republics of Abkhazia and South Ossetia (whose emergence and existence would not have been possible without Russia's support) and the appearance of a peace process dictated by Russia. That status reflected the realities of the period and the potential of the parties involved (in particular, the weakness of Georgia in its desire to regain control of the breakaway provinces) and the geopolitical circumstances which made Russia the dominant political and military force in both the conflicts and in the region as a whole. Thus it was possible to preserve a minimum level of stability around the conflicts, i.e. to keep military operations suspended, for about a decade.3. At the turn of the century it became increasingly apparent that the suspended status of Abkhazia and South Ossetia was both anachronistic and impractical. It was also clear that the peace process and the republics' self-determination were illusory. All this became obvious after the major geopolitical changes in 2001 and 2003 which included NATO's eastward enlargement, the rise of interest in security issues, the promotion of democracy and new sources of energy resources after 11 September 2001. As a result, the West (mainly the United States) became interested in Georgia and the entire South Caucasus, and thus an alternative player to Russia emerged in the region.However, it was the transformations in Georgia triggered by the Rose Revolution (2003) and the resulting change of leadership and reforms undertaken to build an efficient, Western-oriented state that had the most direct and crucial impact on the situation over the conflicts. Georgia gained a potential which enabled it to question the illusory order surrounding the Abkhazia and South Ossetia conflicts.4. Restoring the country's territorial integrity became one of the priorities for Georgia under president Mikheil Saakashvili. This objective was to be achieved through a comprehensive strategy involving, pressure on the separatists, including military pressure through modernisation of the army, as well as measures to undermine the internal legitimacy of the separatists leaderships by creating alternative centres of power. Other elements of the strategy included reducing the role of Russia, seen as a de facto player in the conflict, pursuing and internationalising the peace process itself (making the West involved in conflict resolution was crucial in this respect). Finally, the strategy also envisaged a readiness to grant Abkhazia and South Ossetia broad autonomy within Georgia. Georgia exposed the weakness of the peace process and the fact that Abkhazia and South Ossetia were mere pawns in the Georgian-Russian conflict. Currently Georgia faces an alternative between a rapid change to the conflict resolution format (Georgia has presented the fullest formula, adjusted by the OSCE and others), or a resumption of military operations (all players involved in the conflict in practice take this possibility into account). The manner in which the problems of Abkhazia and South Ossetia will be solved will also be one of the most important factors in determining the future of Georgia, i.e. its stability, reforms and pro-Western orientation.5. In recent years, the conflicts in Abkhazia and South Ossetia have ceased to be only local: they are no longer an internal Georgian conflict, not even a conflict between Georgia and Russia - they have become an element in the game between Russia and the West. The restoration of Russian dominance in Georgia and in the South Caucasus, and the sustainability and future development of political and economic investments made in the region by the West over the last two years, largely hinge on the outcome of the conflicts. Current clashes in Abkhazia and South Ossetia have been used as bargaining tools in the dispute between Russia and the West concerning the future of Kosovo and the Balkans. In the end, by getting involved in the South Caucasus and supporting transformations in Georgia, in a barely noticeable way and supposedly against its intentions, the West has become partly responsible for the future of Abkhazia and South Ossetia.6. 2008 may prove to be a turning point for the conflicts in Georgia as a consequence of the resolution of the question of Kosovo, which is perceived as a precedent or catalyst for solutions in the Caucasus, and the unexpected political crisis in Georgia which started in autumn 2007. The Georgian crisis has shown that the transformation of the state is not yet complete, and its reliability in the West may be undermined. Georgia has proved sufficiently determined and strong to question the pathologies that arose in connection with the conflicts and propose an alternative, but too weak to safely tackle them on its own.