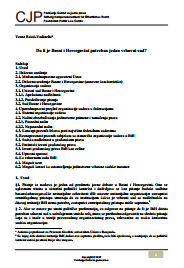 Author(s): Vesna Rakić-Vodinelić
Subject(s): Law, Constitution, Jurisprudence, Constitutional Law, Civil Law, Public Law, Government/Political systems, Evaluation research
Published by: Fondacija Centar za javno pravo
Keywords: Public law; constitution; Constitutional court; government; BiH; entities; civil law; Supreme court;
Summary/Abstract: The need to establish the Supreme Court which would have the competence on the entire territory of Bosnia and Herzegovina has been considered. In order to answer the question whether BiH really needs a Supreme Court as such, first there is a need to answer the questions relevant to any judicial organization: What is the type of government structure in BiH from the legal and practical point of view – unitary, federal/regional, with symmetric or asymmetric federalism/regionalism, or confederation? What type of organization do BiH courts fit into from the government structure point of view? Is there as basis to compare judicial structure in BiH with European states (if so, which states), in order to perhaps find efficient example of the role model? Does the current court structure provide legal equality (pertaining to both substance and process) of legal entities, as viewed both from legislative and pragmatic aspect? Bearing in mind the answers to the preceding questions, is it possible to formulate the efficient proposal related to the highest judicial instance in BiH? The conclusion is that BiH is actually weak federation of asymmetric type (one of its entities has federal, the other has unitary structure and Brčko District has a special status) which is subject to international protectorate. Considering the open ethnical preferences of two ethnical communities and “special parallel relations” established with neighbouring countries (Article II/2/a/) it can be asserted that the borderline between weak federation and confederation in BiH is extremely fluid. Constitutional Court and Court of BiH exercise the judicial authority on the entire territory of BiH. Although constitutional courts usually do not classify as the bodies of regular judicial authority, this classification seems justified in the case of BiH bearing in mind some of the competencies of this Court. These are appellate competence (i.e. constitutional complaint or constitutional appeal) “for issues related to the Constitution which stem from the ruling of any other court” in BiH (Article VI/3 /b/) and submission of question from any other court in BiH on compliance of certain documents with BiH Constitution, European Convention for the Protection of Human Rights, as well as on the implications of general norms of the international law. Basically, the Court of BiH is the federal court with first instance competence in the domain of criminal and administrative disputes related to the BiH regulations, and exceptionally, for some criminal acts, related to the entity regulations. In litigation and executive-judicial area the Court has a meagre competence in solving inter-entity disputes (including district) and in compulsory execution. Legal remedies against the decisions of this Court are all of remonstration kind (retraction) and allow only for the control of the decisions of this Court, not of the entity courts. Therefore, this court, both by its name and by its competence is not a supreme court. After the constitutional reform in 2000 and following the legal comparative review of the structure of the courts in federations, the Swiss Federal Court competencies, position and jurisdiction are used as an example. It is recommended to establish a Supreme Court of BiH which would unite in itself the Constitutional Court and competencies of the Swiss Federal Court in civic, criminal and public right area. Thereby, in cases of extraordinary legal remedies, it would be possible to check the decisions made by the entity courts in terms of the implementation of law in BiH with an objective to achieve the uniform implementation of law and real equality of citizens before the law.