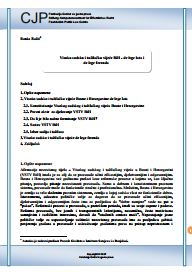 Author(s): Ranka Račić
Subject(s): Law, Constitution, Jurisprudence, Constitutional Law, Public Law
Published by: Fondacija Centar za javno pravo
Keywords: Public law; constitution; Constitutional court; VSTV; HJPC; High Judicial and Prosecutorial Council; BiH; composition; legal framework; judges; prosecutors; appointment;
Summary/Abstract: In the last ten years the High Judicial and Prosecutorial Council of Bosnia and Herzegovina (HJPC BH) has been trying to solve the basic task – to ensure independent, impartial and professional judiciary. It is a process which does not allow rash actions. However, in spite of the best willingness and results that cannot and must not be underestimated, the HJPC BH has failed to impose itself as an independent authority on the way of building a system where it would shape independent judiciary, in its full capacity and in a responsible way. There are several reasons for that. They can be classified into two groups, as regards the work of the HJPC BH. The reasons are those of objective nature and those of subjective character. The reasons of objective nature are related to the very errors that exist in the Law. There are systemic errors in the Law on HJPC BH. The election of the members of the HJPC BH is insufficiently transparent and does not guarantee that in the HJPC BH there will be those members that are the best representatives of the authority they come from. They should be featured by knowledge, high ethical credibility, reputation and ability to achieve the set objectives. Also, this body consists of not only judges but also prosecutors who are parties to the proceedings, and thus there are justified reasons for objectivity in work. If we add to this that the HJPC BH composition also includes lawyers – as representatives of parties, and previous experience with the election of the members of the HJPC BH by the Parliamentary Assembly of BH and the Council of Ministers, that by rule elected were the members that were close to the ruling parties, then it is more than evident that the credibility and reputation of the HJPC are seriously and reasonably questioned. The second reason, which is outside the HJPC BH is non-existence of consensus of the representatives of the executive power regarding the way how to enforce reform processes. If in this endeavour there are centrifugal and centripetal forces, the failure is guaranteed. As regards the coming and announced amendments the representatives of the judicial community, executive power and academic community should work together to amend the Law on HJPC BH, so the HJPC BH would enable each citizen of Bosnia and Herzegovina to be entitled to an independent, dignified, objective and professional judge, and the judiciary to gain reputation, authority and dignity, where a judge will see his independence as a duty to provide the requested legal protection to each citizen.