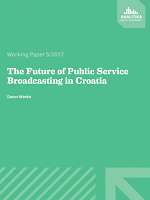 Author(s): Davor Marko
Contributor(s): Mirela Rožajac-Zulčić (Editor)
Subject(s): Politics, Media studies, Communication studies, Policy, planning, forecast and speculation, Transformation Period (1990 - 2010), Present Times (2010 - today), Public Finances, ICT Information and Communications Technologies, Socio-Economic Research
Published by: Analitika – Centar za društvena istraživanja, sva prava pridržana
Keywords: Croatia; media; public service broadcasting; future; finances; regulations; socio-cultural and political aspects; digitalization;
Summary/Abstract: The transformation of the former state-controlled Radio-television Zagreb into a broadcaster serving the public interest in Croatia, and its subsequent reform to comply with the European standards and principles is the main focus of this paper. Croatian-Radio Television (Hrvatska radiotelevizija, or HRT) - as the reformed broadcaster was named after the first multi-party elections in 1990 - underwent several developing stages. The analysis provided within the study reflects on the process of its evolution against the backdrop of specific political, social and economic factors, also taking into account challenges of a substantial and technological nature. In recent years, as Croatia moved towards full membership of the EU, the status and operation of the PSB, as well as its broadcasting regulatory mechanisms and media policies, were reviewed to bring them in line with the new EU regulations. Croatia’s case seems somewhat unique compared to other countries that were once part of the former Socialist Republic of Yugoslavia, but it also shares some similar contextual characteristics. First and foremost, the funding model is what sets apart the Croatia’s PSB from other Western Balkan post-socialist states. Considered one of the most successful models, HRTs license fee collection system has been continuously and systematically improved since the 1960s when it was first introduced. Albeit the level of editorial independence and financial sustainability has seen frequent oscillations at different points in time, HRT maintains its financial sustainability, and manages to drive its internal development. Like the other countries, Croatian PSB is under permanent political pressures, while its program has been commercialized, becoming less distinctive from content provided by commercial competitions. In order to assess the transformation of HRT into a public service, considering the challenges to its current operation and further development, the paper intends to answer the following questions. The first is related to the development of regulation and media policies in regard to PSB, including the various actors involved, the political setting, and internally or externally driven reforms. The second question targets the current regulation, status and role of the PSB in Croatia, with special attention to the PSB remit, funding model, formal and de-facto independence, market share, and the progress regarding technological innovations and digitalization. Finally, the paper deals with the challenges to the PSB operation in Croatia, taking into account ongoing debates on the global level, and country-specific discussions. This research draws upon the ongoing debates on the status and operation of PSB in a changing media environment. Technology developments, commercialization processes and the growing role of the market in defining media roles and audience tastes, information abundance, and audience fragmentation significantly define what we know today as ‘media ecology’. In such a context, the status and role, funding model and social role of PSB, and its relation with the audience, are contested. To evolve into a genuine public media, Croatian Radio-Television has to face these challenges both internally and externally. This study follows recent and ongoing debates on the future of PSM, and builds its analytical framework on concepts and ideas developed by contemporary PSM scholars such as Donders, Lowe, Moe and Van den Bulck, also taking into account theoretical accounts of media and PSB developments in the post-socialist area, including Jakubowicz, Sukosd, Splichal, and others. This research paper is divided in four main sections. The following section outlines the main theoretical concepts and the key debates in regard to the future of PSB. The third section reflects on the country background including political and economic factors, the development of the media system in Croatia and its PSB. The final section summarizes the main findings and discusses them in relation to the socio-political context and contemporary trends related to regulation, funding and the technological developments related to PSB in general. A discussion of the main trends and dilemmas on the European and regional level is presented within the final section.