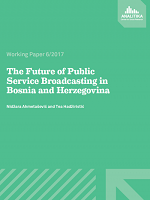 Author(s): Tea Hadžiristić, Nidžara Ahmetašević
Contributor(s): Mirela Rožajac-Zulčić (Editor)
Subject(s): Politics, Media studies, Communication studies, Policy, planning, forecast and speculation, Public Finances, ICT Information and Communications Technologies, Socio-Economic Research
Published by: Analitika – Centar za društvena istraživanja, sva prava pridržana
Keywords: BiH; media; public service broadcasting; future; finances; regulations; socio-cultural aspects; digitalization;
Summary/Abstract: Public Service Broadcasting (PSB) in Bosnia and Herzegovina is in crisis. Since its creation in 2002, it has steadily been losing both revenue and audience. The fact that it is dysfunctional and highly politicized has brought it to the verge of financial collapse. The state broadcaster, BHRT, narrowly averted being shut down in June 2016 due to a lack of funding, and its fate remains uncertain. The catastrophic economic situation, lack of substantive progress towards EU accession, fragile civil society, and state capture make the situation more difficult. One of the main challenges for PSB in post-communist countries is ending the capture of the state by political parties, which in BiH is additionally complicated by ethnopolitics and legal uncertainty, which results from what Zielonka and Mancini call “floating laws” – frequent changes to legal frameworks and weak and selective rule of law. This paper probes the future prospects for PSB in BiH by looking at the developmental path of PSB and its current situation, taking into consideration these complex contextual challenges. Given the challenging situation with respect to the development and functioning of PSB in BiH, the paper discusses three aspects relevant to understanding its prospects. First, the development of the policy framework for PSB is examined by looking at how the initial media policy was adopted and what roles were played by key actors, such as the EU, international donors, local political elites and civil society, in policy-making processes. Special attention is placed on exploring the impact that EU accession criteria have had on policy-making regarding PSB. Secondly, the current situation with respect to the functioning of PSB in BiH is explored, particularly examining political, legal and financial factors. Finally, the paper studies the future prospects of the PSB system in the context of a rapidly changing multi-channel environment driven by convergence, digitalization, and the proliferation of social media and new media platforms in general. This analysis is positioned within the context of contemporary debates on the future of PSB, especially with regard to its legal, financial, technological, and socio-political dimensions. Special attention is paid to the role of PSB in postsocialist states, as well as the specific nature of the post-war political situation in BiH, its power-sharing structures, and implications for the functioning of PSB. In order to approach these issues, the paper draws on the work of Jakubowicz on public broadcasting in post-communist settings, (2004, 2008) and Hallin and Mancini’s work on political parallelism and colonization of the media (2004, 2011). The prospects of PSB in post-communist transitional societies are analyzed in relation to the work of Jakubowicz and Sukosd, Zielonka and Mancini, and Voltmer. For a better understanding of the broader political context, we refer to Bugarič’s concept of unfinished transition and state capture in Europe’s peripheries, as well as Mujkić’s writing on Bosnian ethnopolitics, to analyze the coalescence of the political elite and national divisions in BiH. Finally, this paper relies on contemporary studies of the media in South East Europe (Petković, Hrvatin, Milosavljević) and BiH in particular. The paper argues that the transformation of the state broadcasters into a genuine PSB in BiH has so far failed with respect to all of the core elements of such a system: funding, independence, remit, and adoption of new technologies. We ascribe this primarily to institutional inertia and subsequent politicization of the public sphere. At the same time, the ongoing debate about PSB in BiH is largely anachronistic, and fails to capture the core challenges and articulate much needed innovative policy solutions that would look beyond the now largely outdated, defunct model of PSB that was introduced in 2002. PSB in BiH is a victim of the political colonization of the media sphere, and weak, dysfunctional state institutions that suffer from the chronic disregard for law demonstrated by ruling elites. The paper first gives an overview of key theoretical concepts and debates relevant to understanding contemporary trends in PSB development, globally and regionally. The next section provides an insight into the overall country context relevant to understanding the contemporary developments regarding PSB in BiH, followed by an outline of the key findings regarding the four crucial dimensions related to PSB in BiH: regulation, funding, technology, and socio-political factors. After a discussion of the key findings and a brief conclusion, the paper ends with a list of recommendations addressed to key stakeholders involved in PSB reform in BiH.