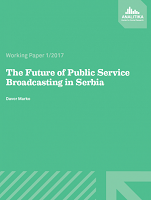 Author(s): Davor Marko
Contributor(s): Mirela Rožajac-Zulčić (Editor)
Subject(s): Politics, Media studies, Communication studies, Transformation Period (1990 - 2010), Present Times (2010 - today), Public Finances, Socio-Economic Research
Published by: Analitika – Centar za društvena istraživanja, sva prava pridržana
Keywords: Serbia; media; public service broadcasting; the future; finances; regulations; socio-cultural and political aspect;
Summary/Abstract: The transformation of former state television broadcasters in post-socialist states and their transition into Public Service Broadcasters (PSBs) was meant to be one of the most visible achievements in the process of democratization. The transformation aimed to break the monopoly of the state in the sphere of public communication, and to enable citizens to access information freely and control the newly established media institution. Nevertheless, recent studies on the development, work, and challenges of PSBs in post-communist and post-socialist states, including those focusing on the Western Balkans, have demonstrated unpredictable and unexpected results of such reform efforts. Tailored after Western models, and supported throughout various media assistance programs, the public broadcasters developed into politicallydependent, financially unsustainable, non-transparent, and programmatically commercialized broadcasters. The serious debate and policy intervention that would take into account the impact of rapid technological changes and the growing multi-channel environment, coupled with audience fragmentation, are generally missing. This paper examines the status, role, and main challenges of the reform of the PSB in Serbia. Taking into account its turbulent past and political misuse during the 1990s, Radio Television of Serbia (RTS) entered the era of democratization with a highly damaged reputation and poor technical, human, and managerial resources. It was challenging for lawmakers, local experts, and international organizations to create a context conducive to the establishment of PSB, and to foster its development according to ‘European standards’. Additionally, the status and operation of RTS was constantly endangered due to the non-transparent and personalized style of management and unsustainable financial planning, and additional challenges caused by technical and digital developments were not approached properly. In order to assess the achievements of the transformation of PSB within the four main domains of analysis – socio and political aspects, regulation, funding, and digitalization – this paper will address three main research questions. The first question is related to the current operation of the PSB in Serbia, taking into account its regulation, status, model of funding and program quality. The second question assesses the entire process of creation of media policies and laws regulating the status of PSB in Serbia, including the actors in this process, their relations and influence. The final question addresses the main challenges of PSB in Serbia with regard to technology innovation and digitalization, use of the new media, and the PSB’s relation with the audience. Transformation of the former state- and regime-controlled RTS into a public service was a big challenge. Primarily, its transformation shared obstacles common to other countries in the region – lack of an institutional framework (which is necessary for its functionality), a small and chaotic media market, an economic situation that was additionally worsened after the global economic crisis, political pressures, and lack of transparency and professionalism – which is a general problem when it comes to public institutions in Serbia. What makes the Serbian case specific is the highly negative reputation and image RTS had after the period of the 1990s when the regime of Slobodan Milošević used the public media as a tool of political propaganda. Additionally, its premises and infrastructure were severely damaged in 1999 during the NATO bombing. The research draws upon the ongoing debates on the status and operation of PSB in a changing media environment. Technological development, commercialization and the growing role of the market in defining media roles and audience tastes, information abundance, and audience fragmentation significantly define what we know today as ‘media ecology’. In such a context, the status, funding model, and social role of PSB and its relation with the audience are contested. In addition, the changing context for media policy and the slow process of transformation in the countries of the Western Balkans raise the questions of what stage of development the PSBs in the Western Balkans are in, how the changes of the media landscape influence this process, and what the main obstacles of transformation are. This paper consists of four main chapters. The next chapter outlines the key theoretical concepts and presents the main debates on the status of PSB, its role and challenges on both a global, mainly European, level, and the local (Serbian) level. This chapter also contains a description of the methodology used for the sake of analysis in this paper. The third chapter briefly presents the most important information on the PSB in Serbia, its history, background, establishment, structure, and operation. The following chapters analytically assess the four main dimensions of analysis within the paper: status and regulation, funding, technological and digitalization challenges, and the sociopolitical aspect of PSB operation. The final chapters provide readers with a discussion of the key findings against the theoretical framework and concluding remarks.