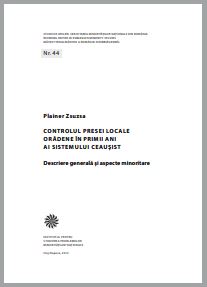 Author(s): Gheorghe Sarau
Subject(s): Sociolinguistics, Romanian Literature, Higher Education , Post-War period (1950 - 1989), Transformation Period (1990 - 2010), Present Times (2010 - today)
Published by: ISPMN Institutul pentru Studierea Problemelor Minorităţilor Naţionale
Keywords: Gheorghe Sarău; Publishing works and literature; Romany language; Ethnic minorities studies;
Summary/Abstract: Gheorghe Sarău (Romania - Bucharest, born in 1956) has been since 1992 a professor doctor at the department of Romany Language and Literature, at the Faculty of Foreign Languages and Literatures (University of Bucharest). At the same time, he has been a counselor for Romany language and Roma at the Direction for Minorities - Ministry of National Education (1992-present). After graduating from university (University of Bucharest, Faculty of Foreign Languages and Literatures - Russian and Hungarian languages Departments; Bulgarian and Spanish as optional courses) in 1983, Gheorghe Sarău began to study Romany individually, language which he taught at the Normal School of Bucharest from 1990to 1994, to a group of future primary school teachers. On 28 September 1998 he became a Doctor of Philology at the University of Bucharest. The doctorate was obtained under the guidance of prof. Lucia Wald in the Indo-European studies field, on the subject of Tinsmiths Roma Language. Gheorghe Sarău attended several training programmes (1990-2000) in the field of Romany Language, under the guidance of Prof. Marcel Courthiade (professor at INALCO Paris) and of Prof. Rajko Djurić -poet and the President of National Roma Union, in Finland (1991), Italy (1992), France (1993 1994, 1995), Germany (1998). He was also invited by Professors Courthiade and Djurić to teach with them Romany courses in Germany (1999 and 2002), at the International Courses of Romany Language, Literature and History. Gheorghe Sarău published his first article in 1982, as a student, and his first book was published in1992 (the first Romany dictionary in Romania - Mic dicționar rom-romîn, Kriterion Publishing House). Over the years, he has published over 70 titles, most of them individually, but also as collective works. He has also played an important role in the standardization of Romany language in Romania, in the organization and development of the Romany studies at the pre-school, school, high school and university level. In October 1992, he introduced the first Optional Course of Romany Language at the University of Bucharest and in 1997 he created the Department of Romany Studies at the Faculty of Foreign Languages and Literatures in Bucharest. He also founded the Distance Learning Department for Romany Language, which helped training over 600 Romany Language school teachers. He has also managed the developing and implementation of strategic programmes of the Ministry of Education in Romania. In recognition for his outstanding contribution to promoting constantly the Romany Language -through writings, through the introduction and consolidation of the Romany language education and through the initiatives regarding the general education of Roma - he has received several awards(Hidalgo Award - Spain, 1999; The Republic of Italy President's Award - Italy, 1999; Decoration and diploma on the occasion of the celebration of 25 years from the founding of the Hindi Language Department in Romania, awarded by HE the Indian Ambassador, Rajiv Dogra, on 29 March 2000, etc.).