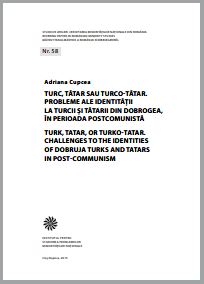 Author(s): Adriana Cupcea
Subject(s): Sociology of Culture, Transformation Period (1990 - 2010), Ethnic Minorities Studies, Politics and Identity, Identity of Collectives
Published by: ISPMN Institutul pentru Studierea Problemelor Minorităţilor Naţionale
Keywords: Turk-Tatar identities; Post-communism period; ethnic community; cultural orientation; Identity overlapping;
Summary/Abstract: This research aims to analyze the use and the references to the terms of Turkish, Tatar or Turkish-Tatar, as a reflection of the argumentative discourse, set up after 1990 in order to legitimize the options for a single ethnic identity, either Turkish or Tartar, or for a double ethnic identity, Turkish-Tatar. At the same time, the research shows the chronological alternation of these options from the level of the official discourse until the community level, identifying the social, political, economic, cultural or symbolic factors that determined this sequence in the post-communist era. From the methodological point of view, the research is based on the semantic analysis applied on the texts published in the newspapers of the Turkish and Tatar communities, Hakses (The Authentic Voice) and Karadeniz (The Black Sea). In the same time I used a series of documents issued by the representative organizations of the two ethnic groups, some published, some original unpublished documents. Finally, the research is based on a large number of semi-structured interviews with members of the two communities, conducted during successive field campaigns initiated in early 2013, the debate over a Turkish, Tatar or Turkish-Tatar identity being a recurring topic, self-discovered to the researcher in the field.