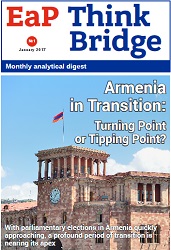 Author(s): Richard Giragosian, Vugar Bayramov, Arseniy Sivitsky, Lasha Tughushi, Victoria Bucătaru, Sergiy Gerasymchuk
Subject(s): Regional Geography, Governance, International relations/trade, Security and defense, Present Times (2010 - today), Peace and Conflict Studies
Published by: PIC Promotion of the Intercultural Cooperation
Summary/Abstract: We are building a bridge between the Eastern Partnership countries — the intellectual one. Unified by the Eastern Partnership policy, the countries are mainly focused on the cooperation with European institutions. At the same time, they disregard the substantial potential of the partnership within the region. After all, despite the geographical proximity, shared past, and, to the great extent, similar difficulties, Armenia, Azerbaijan, Belarus, Georgia, Moldova, and Ukraine extremely differ from each other in terms of their political and social situation. Nevertheless, the neighbours take it slow to learn from each other’s success or failures. And sometimes they just do not get accurate information from neighbouring countries, especially given the widespread influence of Russian propaganda. Bringing together expert communities of the Eastern Partnership, EaP Think Bridge Initiative aims to tackle this problem. This bridge between the leading think tanks of the region is an opportunity to receive the latest first-hand analytics. We are pleased to present the result of this cooperation – the monthly EaP Think Bridge Digest. The first issue opens with the analysis of the situation in Armenia on the threshold of the parliamentary elections in April 2017. Considering the escalation of conflict in Nagorny Karabakh and the uneasy situation in the country, the elections do not seem to be a predictable culmination of the well-ordered and planned transition to a parliamentary form of government anymore. An important part of each digest issue is a short analytical overview of the month in six countries. It is a kind of photograph of the domestic political situation, economy, and foreign policy of the country. No unnecessary information included, only the most important data from local experts, and a clear scheme of analysis that enables to trace the dynamics of events. Let’s start with the overview of 2016, which was the year of upheaval, change, and hardship for the region. Currently, with the support of the F. Ebert Foundation Regional Office “Dialogue Eastern Europe”, our bridge is built between the following analytical centres: Centre for Economic and Social Development (Azerbaijan), Regional Studies Centre (Armenia), Centre for Strategic and Foreign Policy Studies (Belarus), Liberal Academy Tbilisi (Georgia), Foreign Policy Association (Moldova), and Foreign Policy Council “Ukrainian Prism” (Ukraine). But we are open for cooperation, and we are looking forward to your ideas for the “Guest Expertise” section. //// CONTENT: ARMENIA: CHALLENGES, CHANGES AND CHOICE // AZERBAIJAN: BELT-TIGHTENING AND BALANCING FOREIGN POLICY // BELARUS: DIALOGUE WITH THE WEST AND THE NEW COMPONENTS IN THE STATE IDEOLOGY // GEORGIA: PRO-WESTERN POWERS LOSE SUPPORTERS THOUGH EU MEMBERSHIP HAS NO ALTERNATIVE // MOLDOVA: NEW PRESIDENT & OLD ISSUES // UKRAINE: BETWEEN RUSSIAN AGGRESSION AND INTERNAL CHALLENGES // ANALYTICA: ARMENIA IN TRANSITION: TURNING POINT OR TIPPING POINT?