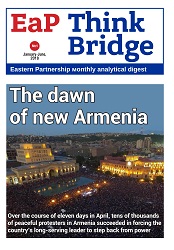 Author(s): Richard Giragosian, Sevinç Aliyeva, Arseni Sivitski, Lasha Tughushi, Victoria Bucătaru, Sergiy Gerasymchuk, Yurii Vdovenko
Subject(s): Regional Geography, Civil Society, Governance, Present Times (2010 - today), Peace and Conflict Studies
Published by: PIC Promotion of the Intercultural Cooperation
Summary/Abstract: After a six-month break, we return with the updated monthly Eastern Partnership Digest and all for the same purpose: to share an up-to-date and unbiased analysis of the situation in the region. Our bridge between the leading analytical centers of the Eastern Partnership is an attempt to fill in the information gap that exists between the six countries - Armenia, Azerbaijan, Belarus, Georgia, Moldova, and Ukraine. The states concentrate on bilateral cooperation with the European Union, undermining the powerful potential of partnership within the region. And the information that countries get about each other is often insignificant, untimely and distorted. The main value of the monthly Eastern Partnership Think Bridge Digest is a fresh analysis from the experts on the ground. The focus of this issue is the turning point for Armenia, where due to the thousands of voices of the streets, the transition to a parliamentary form of government has unexpectedly become a transition to a new style of policy. Traditionally, an important part of each Digest will be short analytical monthly reviews of the situation in the countries, first-hand analysis of key events in domestic and foreign policy and economy. In this issue, the country authors tell about the difficult and troubled first half of 2018. The protests rose not only in Armenia. Numerous demonstra¬tions also stirred up Georgia, forcing the prime minister and the attorney general to resign. The streets of Chisinau raged after the mayoral election results had been annulled. Azerbaijan also faced protests but without surprises as Ilham Aliyev remains in the presidential office for a fourth term. And Ukraine and Belarus are only entering the election process, although the upcoming presidential and parliamentary elections are already affecting the agenda in full. The new part of the Digest will be devoted to the analysis of Ukraine’s successes and difficulties in implementing the priorities of the Joint Working Document “20 Deliverables of the Eastern Partnership until 2020”. The expe¬rience of Ukraine can serve as an example of using the set of tools proposed by the European Union for other countries in the region. As before, we are open to cooperation and will gladly accept your ideas and comments. ////CONTENT: ARMENIA: FIGHT FOR TRANSFORMATIONS // AZERBAIJAN: CALM STRUGGLE // BELARUS: FROM UNPREDICTABLE KREMLIN TO THE WEST AND THE EAST // GEORGIA: THE NEW GOVERNMENT IS LOOKING FOR A WAY OUT // IS MOLDOVA STILL ON THE TRACK OF DEMOCRATIC REFORMS? // UKRAINE: ECONOMIC GROWTH AND FOREIGN POLICY STRUGGLE BEFORE ELECTIONS // ANALYTICA: THE DAWN OF NEW ARMENIA 20 DELIVERABLES FOR 2020: WHERE IS THE EASTERN PARTNERSHIP HEADING?