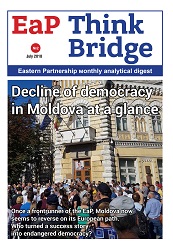 Author(s): Richard Giragosian, Sevinç Aliyeva, Arseni Sivitski, Lasha Tughushi, Victoria Bucătaru, Sergiy Gerasymchuk, Hennadiy Maksak
Subject(s): Regional Geography, Civil Society, Governance, Present Times (2010 - today), Peace and Conflict Studies
Published by: PIC Promotion of the Intercultural Cooperation
Summary/Abstract: On the way to tightening relations with the EU, domestic changes in the Eastern Partnership countries have always been a required precondition. One thing that western partners keep a close eye on is internal reforms. But what drives these reforms and what slows them down? Is it responsible authorities, documented agreements, or European carrots and stick ? The case of Moldova, once a frontrunner of the EaP, is the focus of this issue. The first to sign the Association Agreement and get the visa-free regime, Moldova now seems to reverse on its European path. Who turned a success story into endangered democracy, Victoria Bucataru analyzes. On the other hand, Ukraine urges closer cooperation with European Union and strives for new platforms, formats, and tools. These desires were a matter of discussions at Ukraine-EU Summit. How the results of negotiations are relevant for all the countries of the region, Hennadiy Maksak tells. All the EaP states are also going through changes. Georgia’s new prime minister turned to issues of ecology in order to meet European standards. Belarus, stimulated by the prospects of a new IMF loan, makes further steps to liberalize the economy. Armenia’s new government went as far as to imprison the former president accused of power abuse. Ukraine struggles to continue the anti-corruption fight. Meanwhile, Moldova experiences democracy crisis, even deepened by the fiscal reform. And the lack of changes in authority approaches in Azerbaijan even led to an assassination attempt on an official. The details of all these changes and even more are in our traditional monthly overviews. //// CONTENT: Armenia: Sustaining the momentum of change // Azerbaijan: Heated up by the mayor assassination attempt // Belarus: Diplomatic wars with Russia // Georgia: Horses in the presidential team // Moldova: Endangered European path // Ukraine: Back to international agenda? // Democracy in Moldova at a glance // From Summit to Summit: Eastern Partnership context In Ukraine-EU relations