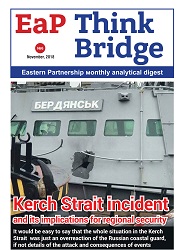 Author(s): Ashot Azazian, Sevinç Aliyeva, Arseni Sivitski, Lasha Tughushi, Sorin Sclearuc, Sergiy Gerasymchuk, Hanna Shelest, Yauheni Preiherman
Subject(s): Regional Geography, Civil Society, Governance, Security and defense, Present Times (2010 - today), Peace and Conflict Studies
Published by: PIC Promotion of the Intercultural Cooperation
Summary/Abstract: The incident in the Kerch Strait is a game changer in the Kremlin’s “hybrid” war. For the first time Russia openly attacked Ukraine, not hiding behind “polite green men” or “local protesters”. And this escalation is dangerous not only for Ukraine. Whether the security of the Eastern Partnership countries is threatened, which legal and political implications have been already caused by the aggression and which are still getting underway, Hanna Shelest analyzed. Western politicians and world leading experts are already concerned about the security in the region. Thus, it is no coincidence that, first time ever, the Munich Security Conference, the most authoritative international forum, held a meeting of the Core Group in Eastern Europe. Whatthey discussed and, most importantly, what they failed to agree upon in Minsk, Yauheni Preiherman shared. And in the meantime Belarus itself arranged military cooperation and the supply of weapons to Azerbaijan. Concurrently, the rest of the region is still absorbed in the electoral process and has pushed security issues to the background. In Armenia, revolution leader Nikol Pashinyan is preparing to get a majority in parliament and return to the prime minister’s seat. At the same time, because of the scandal and the criminal case against representatives of the former government, the country may lose its Secretary General post in the CSTO. Georgia elected the first female president. After her odious statements regarding the 2008 Russian-Georgian war, the question remains as to what position the president-elect Salome Zurabishvili will take towards the Russian Federation. And Moldova’s European partners moved from warnings to actions and froze economic assistance to the country until the parliamentary elections. What else happened in the Eastern Partnership in November, find out in the latest issue of the Digest. //// CONTENT: Armenia lost its CSTO Secretary General post? // Azerbaijan: Military cooperation with Belarus // Belarus “tightens the screws” before the election // Georgia: New president with new problems // Moldova: Facing European ultimatums // Ukraine: Heading into elections in the context of war // Analytica: Kerch Strait incident and its implications for regional security // Munich in Minsk: Stating the big regional problem