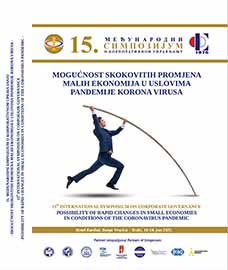 Author(s): Guste Santini
Subject(s): Economy, Micro-Economics, Financial Markets, Public Finances, Accounting - Business Administration
Published by: Finrar d.o.o Banja Luka
Keywords: balance of payments and its components; tax burden; standard approach; classification of taxes by time criterion; budget deficit; public debt;
Summary/Abstract: A standard approach to taxes and taxation is not appropriate for a market state. The paper shows how the classification of taxes according to the criterion of time more appropriately identifies the state and role of the tax system and tax policy. To show this, we analyzed the impact of the balance of payments of goods and services on tax revenues. The taxation of primary and secondary income is specifically regulated by Ttreaties for the avoidance of double taxation and is not the subject of this paper.The paper shows how, only through the approach of tax classification according to the criterion of time (taxes on the past, present and future), it is possible to assess whether and how much tax is exported or imported through the exchange of goods and services with foreign countries. The standard approach to taxes does not distinguish whether and to what extent tax revenues are the result of foreign exchange, but records tax revenues based on cash flow.The paper first specifies how taxes are imported or exported through the balance of payments of goods and services (macroeconomic approach). Based on the macroeconomic interpretation,a calculation was performed for Croatia, Slovenia and Serbia in order to show the unsustainability of the standard approach to tax revenues and tax burden in an open (market)country. These and such questions cannot even be asked on the basis of a standard approach to taxes and taxation. Slovenia has a surplus on the account of trade in goods and services, so it is a tax exporter. Croatia has the largest foreign trade deficit and the largest foreign trade surplus in services, thanks to tourism, which ultimately results in significant tax exports. Serbia records a smaller foreign trade deficit than Croatia, but also a much smaller surplus on the services account, so it has a balance of payments deficit compared to Slovenia and Croatia.The paper shows how the balance of payments of goods and services changes the tax burden in the observed countries. And even more so as the country is more open to exports.The findings of the analysis indicate that the most important economic goal in a market country is the current account surplus of goods and services. Balances on primary and secondary income of the balance of payments are considered to be a reflection of economic policy in the past, which means that the movement of the balance of payments is the starting point in the analysis of economic policy in a market country. While Slovenia, as the most developed country, takes care of the competitiveness of its own economy, in Croatia and Serbia the fiscal approach to the tax system dominates, which, in turn, reduces the competitiveness of these countries and reduces economic growth rates.At the end of the paper, the results are compared based on the standard approach and the time classification approach.