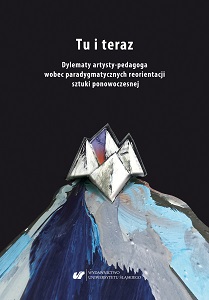 Author(s): Krzysztof Kula
Subject(s): Education, Fine Arts / Performing Arts
Published by: Wydawnictwo Uniwersytetu Śląskiego
Keywords: Engrams; intermedium; graphic imaging; post-graphic objects; substitution in performance; graphic poles; press transformations
Summary/Abstract: As a participant in the discourse concerned with the themes of the project “Here and now,” I would like to present several of my thirteen Engrams – traces of memory (artistic experiences).Post – graphic objectsA single graphic object or installation, situated in a new context, in the snow, water, fire, an apartment or a gallery, becomes a post – graphic object.Mobile tubeAnother series of open air experiments – in my graphic imaging, mountains or seacoast became a training ground for new experiences, in the face of nature, my thinking changed, making graphics “mobile.”Press transformationI created a representation of concave printing presses as a light installation. I built it out of overexposed presses in multiple layers, revealing their transparent, multiplied graphic image. On the training ground of art. Open air practice became for me a “Training ground” – an artistic research field, which I sometimes share with another artist.ApeironThe objects which I used became a „leaven” of activity, and their discovered performative value started the process of an artistic de-logicalization of their original mundane functions, in order for them to acquire a new logic in the sphere of art.Poles, or on the collaboration of artists“Poles,” or more specifically “Graphic poles” – constitute my own project. It originated in the need of an encounter and dialogue with another artist, providing an opportunity of showing “polar” representations of Polish and international artistic circles.Graphic shamanismA secondary usage of several props and intentional gestures, together with a new supplement of ritualistic actions and a sequence of events, were to revalue the image of the original performance held open air in Żywiec Beskids. The new performance was an attempt at a reflection on the theme of repetitions.Dialogues with fellow artists“Hommage a Tomasz Struk” – a graphic installation devoted to the memory of the outstanding artists refers to a reflection over his art, leaving a memory trace within me. In aqua scribireA synesthetic “In aqua scribere” is an installation which combines image, music and movement subordinated to natural laws. It is film recording of a fragment of performative actions. My artistic experiences radicalized in face of nature. Perhaps in these several described Engrams – emanations of creative experiences, I perceive an opportunity of inscribing myselfinto the multiple relations between ecology and art.