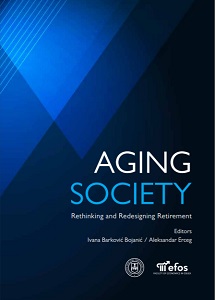 Author(s): Anita Pavković, Alka Obadić, Katarina Marošević
Subject(s): Geography, Regional studies, Labor relations, Economic policy, Demography and human biology, Gerontology, Socio-Economic Research
Published by: Sveučilište Josipa Jurja Strossmayera u Osijeku, Ekonomski fakultet u Osijeku
Keywords: working-age population; older people; financial indicators; regional perspective;
Summary/Abstract: The majority of European countries are witnessing a population aging process for several decades. This trend is rapidly transforming the age structure of society, resulting in a declining share of working-age persons in the total population. During the next three decades, the number of older people is projected to follow an upward trend. Population aging has resulted primarily from a long-term fall in fertility rates and increased life expectancy. The growing number of older people (65+) within society leads to a range of economic challenges, such as pressure on economic growth, reduced labor supply, higher social and healthcare costs, etc. Such negative processes call into question the sustainability of public finances. Namely, assuming that the old-age dependency ratio will continue to rise, a shrinking labor force may no longer be able to provide enough earnings for pensions and healthcare systems. One of the major areas of concern for policymakers is the cost of providing adequate health and long-term care, as very old people consume proportionally more social services than other age groups. Demographic trends of population aging in Croatia are rather similar to other EU Member States. As the issue of population aging is very important, it is often present in scientific literature and theory and therefore it should be at least equally important to economic policymakers. The main analysis in the chapter includes the relation between population aging and potential pressure on the size of the workforce and the financial challenges of our social systems. Because the share of older people (65+) differs between the EU Member States, the regional analysis in the context of the median age of the population in each of the EU-28 Member States is provided. Furthermore, the overall scores of the Active Aging Index (AAI) for EU-28 are presented, showing a regional aspect of population aging. The chapter also explains potential financial products and services which can support solving the aforementioned social and economic problems based on the analysis of contemporary financial systems, techniques, and mechanism, etc., which should be implemented in the countries under study.