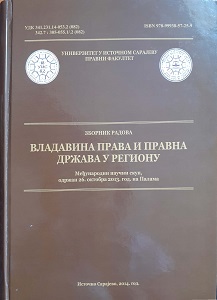 Author(s): Gordana Stanković, Marijana Dukić Mijatović
Subject(s): Civil Law
Published by: Правни факултет Универзитета у Источном Сарајеву
Keywords: Rule of law;Legal state;Principle of effectiveness;Civil court proceedings;
Summary/Abstract: This document analyzes the operationalization of the normative principles of efficiency in each branch of civil court proceedings in order to perceive the way procedural systems support and promote the rule of law. In legislator’s attempt to exercise the right to trial within a reasonable time, the procedural efficiency became the primary goal of the procedure. The legislator concretized his efforts to speed up the procedure on normative level as much as possible by primarily reformed fundamental procedural principles and their range. In civil proceeding, the principle of effectiveness is formulated in a new way. The legislator did not meet the provision that the court shall conduct proceedings efficiently, but concretized this basic rule by a number of other provisions. Certain statutory provisions in LCP (Law on Contested Procedure, 2011), however, not only failed to speed up the procedure and make it efficient, but have also opened new opportunities for filing a constitutional complaint to the European Court for Human Rights. Besides, certain legal provisions are seriously threatened by certain fundamental principles of procedural and functional human rights that are derived from them. On the other hand, the basic legal and political objectives the legislator had in mind in the course of legislative procedure were effectiveness, efficiency and functionality of the enforcement process, ensuring transparency of data on debtor’s assets in order to prevent a failure in the execution and implementation of European legal standards in the area of enforcement procedures and in accordance with the recommendations of the Council of Europe. In order to achieve these goals, the Law provides that the court is obliged to act with urgency in the proceeding. In addition, the enforcement court is required to process execution and security within a reasonable period of time, which is result of the rules on appropriate application of the rules of civil procedure. The legislator did not only proclaim the principle of the enforcement procedure, but also concretized series of legal provisions so that entire execution procedure is normatively conceived on the principle of efficiency and urgency. The principle of efficiency, which enables significant legal and political and legal and technical goals, not only is not explicitly formulated in the Law on Non-Contentious Proceedings (1982) as one of the fundamental principles of procedure, but some special extra-judicial proceedings are provided to be urgent. Having in mind the nature of the contentious procedure and the fact that in this case civil rights are protected and exercised in the public interest, it is required that the principle of efficiency is one of the fundamental principles this operation should be based on. For a number of legal provisions it is clear that, despite the principle of efficiency is not explicitly claimed, it represents one of the fundamental principles of civil court proceedings. Law on Amendments to the Law on Courts of the Republic of Serbia provided a new legal instrument to protect the right to trial within a reasonable time in a procedure which lasts too long, the right to compensation for the violations of the right to trial within a reasonable time and the procedure for the protection of the right to trial within a reasonable time due to delay in the proceedings. The principle of efficiency is one of the basic principles and it is regulated by the Law on Bankruptcy (2009). It is an expression of the legislator’s efforts to enable settlement of bankruptcy creditors and thus eliminate potential interference in their operations as well as to eliminate economically unsuccessful companies from legal transactions and to return financial funds into production flow. Authors noted that, during each process of reform, especially under the influence of the European Court of Human Rights, which has led to the conclusion that the efficiency of court proceedings is a prerequisite for the realization of the rule of law, the legislator tried to find a rational balance between legality and efficiency with more or less success, as well as the basic principles relating to the quality of legal protection.