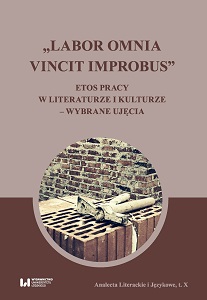 Author(s): Monika Urbańska
Subject(s): Language and Literature Studies, Studies of Literature, Polish Literature
Published by: Wydawnictwo Uniwersytetu Łódzkiego
Keywords: Jan Lechoń;emigration;poetry of XXth century;autotheraphy;writer’s block
Summary/Abstract: Jan Lechoń has not been saved due to the impressive literary production, but in the period marked by creative block he worked on other projects related to the promotion of Polish culture in the country and abroad. In his student years Lechoń was a member of several circles and societies, he was the author of great volumes of poetry as well (Karmazynowy poemat, Srebrne i czarne). He was also the author of a collection of satires Rzeczpospolita babińska and co-founder of the poet’s cafe ,,Pod Pikadorem”. In the 1930s, in Paris, as Polish culture attache, he organized many events promoting Polish literature and culture. In the period of exile in New York, ongoing the last fifteen years of his life, Lechoń returned to writing, devastated by the news from the ruined (as a result of military operations) homeland. This resulted in four volumes of poetry. In New York, as earlier in Warsaw and Paris, he acted in the cultural life, organized or co-founded several ventures, including poetry readings, anniversary, broadcasts on Radio Free Europe. He has no family and no true home, so work become the meaning of his life. Work was a way to combat depression and neurasthenia, it was also a way to deserve ,,a good necrology” and fulfill the ambition of admiration in the eyes of other people. Especially the next generation.