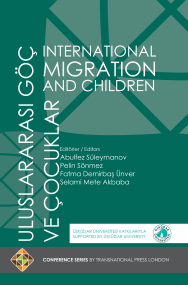 Author(s): İbrahim Özdemir
Subject(s): Gender Studies, Education, Geography, Regional studies, Social development, Migration Studies
Published by: Transnational Press London
Keywords: education; Syria; migration; children; gender;
Summary/Abstract: History of civilizations teaches that migration and its positive and negative results for humanity is old as humanity itself. There are many reasons, famines, droughts, natural disasters, economic, as well as political one. The migration of Syrians since 2011 is a result of domestic political conflicts and instability. The Syrian conflict with a brutal military crackdown on anti-government civil and peaceful protestors in Daraa, a small town southwestern Syria, began in March 2011. This conflict eventually has displaced more than 12 million people by Feb., 2016. Majority of Syrians have fled to neighboring countries in the region, such Jordan, Lebanon, and Turkey. Therefore, the Syrian conflict is one of the biggest humanitarian, peace, and security crisis facing the world and humanity today. Intensified fighting and a deteriorating humanitarian situation continue to cause massive people flows within Syria and into the region. The UN estimates 13.5 million people in Syria need humanitarian assistance while 4.6 million have fled to neighboring countries, including Lebanon, Jordan, Turkey, Iraq and Egypt.