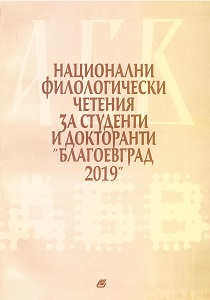 Author(s): Stelina Petriti
Subject(s): Language and Literature Studies, Theoretical Linguistics, Studies of Literature, Historical Linguistics, Albanian Literature, Philology
Published by: ЮГОЗАПАДЕН УНИВЕРСИТЕТ »НЕОФИТ РИЛСКИ«
Keywords: Albanian language; history of the Albanian alphabet and spelling; two main dialects: Gheg and Tosk
Summary/Abstract: Albanian is an Indo-European language which forms its own branch in the Indo-European family and has no close relatives. It is spoken by about 7.6 million people, mainly in Albania and Kosovo, and also in parts of Italy, Macedonia, Montenegro, Greece, Romania, Serbia, and the diaspora. Albanian is thought by some scholars to be a descendant of Illyrian, a group of Indo-European languages spoken in the Western Balkans until perhaps the 6th century AD. Others believe that Albanian descended from Thracian or Dacian, Indo-European languages spoken in parts of the Balkans until about the 5th century AD. Albanian absorbed some words from Greek and many words from Latin between the 2nd century BC and the 5th century AD. After that, it was influenced by the languages of Slavic and Germanic tribes who settled in the Balkans. There were also borrowings from the Proto Romanians or Vlachs from the 9th century AD. A few brief written records are preserved from the 15th century, the first being a baptismal formula from 1462. The scattering of books produced in the 16th and 17th centuries originated largely in the Gheg area and reflect Roman Catholic missionary activities. Much of the small stream of literature in the 19th century was produced by exiles. Perhaps the earliest purely literary work of any extent is the 18th-century poetry of Gjul Variboba, of the enclave at San Giorgio, in Calabria. Some literary production continued through the 19th century in the Italian enclaves, but no similar activity is recorded in the Greek areas. All these early historical documents show a language that differs little from the current language. The documents from different regions and times exhibit marked dialect peculiarities, however, they often have a value for linguistic study that greatly outweighs their literary merit. The standard language, written in a standard Roman style orthography adopted in 1909, was based on the south Gheg dialect of Elbasan from the beginning of the Albanian state until World War II and since, has been modeled on Tosk. The Albanian alphabet, that is still in use today, was approved in the Congress of Manastir and it is composed of two main dialects: Gheg and Tosk