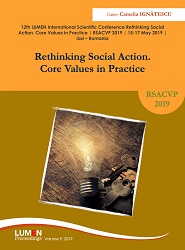 Author(s): Gabriela Cristea, Ionut-Constantin Manole
Subject(s): Educational Psychology, Sociology of Education
Published by: Editura Lumen, Asociatia Lumen
Keywords: Training Theory; concepts of informatics; disciplinary matrix; fundamental concepts; epistemology;
Summary/Abstract: The Training Theory or General Didactics has historically evolved in the pedagogy asserted in the modern and postmodern era, as a sub-element of the General Theory of Education (which integrates the Foundations of Pedagogy and Education Theory, approached in a narrow sense, referring only to "the sides of education").In the early modern age, its foundations were ethical and psychological. The ethical foundations aimed at developing the goals of "education theory", predominantly related to intellectual education. The psychological foundations aimed at developing the methodology of education that includes the forms of organizing training.In modern and advanced modern (postmodern, contemporary), the general didactics, asserted under the formula of the "theory and methodology of the training", is founded philosophical (epistemological), psychological, sociological and political, anthropological and cultural. The multitude of perspectives calls for a special analysis model of computer-based training activities. We consider: a) the valorisation of the fundamental concepts of informatics (Data, Information, Algorithms, Graphs, Database, Networks, Feedback) in defining and analyzing the object of study, normativeness and methodology of research- specific to the training theory education / general didactics; b) their use in the validation of the pedagogical language involved and perfected in a general ideal-model (the curriculum model of the training activity), but also in the applied models (see the curriculum model of the lesson, managerial approached). On their basis we can consolidate the specific pedagogical language of the training theory, structured at the level of a "disciplinary matrix" or a "strong epistemic nucleus".