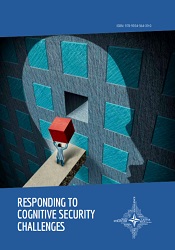 Author(s): Anton Dek, Kateryna Kononova, Tatyana Marchenko
Subject(s): Politics, Media studies, Security and defense, ICT Information and Communications Technologies
Published by: NATO Strategic Communications Centre of Excellence
Keywords: Ukraine; social networks; VKontakte; security; ideological posts;
Summary/Abstract: In May 2017, the President of Ukraine put into effect a decision of the National Security and Defence Council (NSDC) to impose economic sanctions on 468 Russian companies. The largest Russian social network, VKontakte (VK), was banned, among others. Because of the ban, the audience for VK in Ukraine decreased significantly and the social network site dropped out of the top ten most popular sites in the country. To better understand the effects of the VK ban, a study was organised to monitor changes in posting dynamics, to analyse user demographics before and after the ban, and to identify the rhetoric used in posts before and after the ban. The dataset includes more than 300,000 Ukrainian VK user profiles. Because the ban does not apply to the territories occupied by Russia, the study examined two target regions: government controlled areas (GCA) subject to the ban, and non-government-controlled areas (NGCA) where the ban was not imposed. The study took place between 1 May 2016 and 14 June 2018. This period was divided into three intervals: before the ban, the first ‘user exodus’, and the second ‘user exodus’. Our analysis shows that VK is markedly less popular in the area controlled by the Ukrainian government (19% less, compared to NGCA). However, those few users left after the ban are more active, producing 4.37 times as much content as those in non-governmentcontrolled-areas. Moreover, these VK profiles are more densely connected. To study the rhetoric appearing in user posts, we used a clustering algorithm that could identify accounts posting about ideological issues. When compared with the majority of other profiles, the characteristics of ideological posts stood out. Before the ban a typical VKuser would write, on average, one post every four days; after the ban the frequency dropped to one post every ten days. Ideological users55 were notably more active — they wrote four posts per day before the ban and 1.6 posts after the ban. Ideological users were also significantly more connected — after the ban the average number of friends for an ideological user grew from 197 to 501, and such users subscribed to 2.25 times more groups than typical VK-users. Our analysis of reposts from ideological groups showed that although the number of users decreased by a factor of three, the activity level of these groups remained unchanged. However, taking into account that most pro-Ukrainian groups left VK after the ban, those who continued to use the network were increasingly posting to an echo-chamber. We conclude that the VK ban was effective in some ways. The network lost a significant portion of its audience and its popularity decreased, but those users who retained their VK profiles after the ban became more connected on average and began consuming more information from a greater number of groups. Despite the fact that the number of ideological users also dropped, those who continued to use VK lost their opposition, so rhetoric became less diverse.