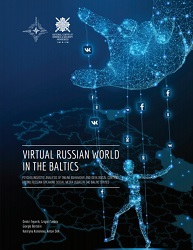 Author(s): Dmitri Teperik, Grigori Senkiv, Giorgio Bertolin, Kateryna Kononova, Anton Dek
Subject(s): Politics / Political Sciences, Politics, Social Sciences, Language and Literature Studies, Economy, Psychology, Media studies, Applied Linguistics, Communication studies, Sociology, Psycholinguistics, Behaviorism, Social Informatics, ICT Information and Communications Technologies
Published by: NATO Strategic Communications Centre of Excellence
Keywords: Russia; Baltic states; online behavior; psycho-linguistics; social media; VKontakte; disinformation; propaganda; political and popular opinion;
Summary/Abstract: More than one in four people in the world have online social network accounts; Facebook (FB) alone has over two billion users, and the site is by some estimates the second-most popular in the world after Google. By comparison, VK, the largest Russian social network on the European continent, has more than 460 million registered user profiles and ranks 10th most popular in the world. Even a regional, largely Russian-speaking network Odnoklassniki [literally “Classmates”] can boast some 330 million users and the 27th place worldwide. There is more and more evidence that Russia has been conducting a long-term campaign aimed at a Western audience which includes both so-called soft power tools as well as more active measures. Social networks emerged as active channels through which Russia actively spreads a toxic mix of disinformation and propaganda. Russia views the Baltic states—and their Russian-speaking populations—as key target groups that can be used as focal points for efforts to spread a disruptive influence, reshape political and popular opinion, and reinforce misleading or false images and narratives. The main objective of the current analysis is the study of the demographic, public posts, and behavior patterns of Russian-speaking users of VK, OK, and FB in Estonia, Latvia, and Lithuania. The analysis achieves this by evaluating the general characteristics of its chosen statistical sample of the target audience; analyzing the public profiles and posts of social network users in the target regions; describing the public profiles of users who create, distribute, and consume ideological content; describing the typical online behavior of ideological active users; investigating the structure of the relationships between ideological active users and ideological groups, and examining the rhetoric used in posts while researching thematic associations related to ideological content. A variety of analytical methods were used, including information search algorithms, data visualization, applied linguistics tools, structural network analysis, elements of expert systems theory, trend and opinion analysis, neural networks, and machine learning. Profiles and public Russian-language posts/comments in the three social media networks in the Baltic states served as the analysis sample, with a geographical focal points being the areas in the three states that comprise large Russian-speaking population: the cities of Tallinn, Maardu and Paldiski as well as Ida-Viru county in Estonia; the cities of Riga, Jūrmala, Jelgava and Liepāja as well as the Latgale region in Latvia; the cities of Vilnius, Visaginas, Klaipėda, Kaunas, Šiauliai as well as Šalčininkai and Vilnius districts in Lithuania. Textual analysis, conducted during the period from January 2013 to May 2017, focused on eleven macro topics such as the USSR, World War II, Russia, West, Ukraine, non-citizens, defense forces, Allies, hostile influence, etc., each of which contained a number of carefully chosen keywords. Analysis revealed presence of a relatively small but significant proportion of active ideological users in every network in each of the Baltic states—the ones who primarily create, support, and disseminate pro-Russian rhetoric, exploiting the increasingly well-developed connections among users as well as the growth in the number of public groups featuring ideological content. The analysis in this study shows that 10% of Russian speaking social network users (identified as real people rather than bots) generate 70% of the ideological information found on those networks. Many events taking place offline are used as pretexts to push certain topics into public discussion, making use of dramatic language. Particular attention is paid to topics related to the Second World War, the USSR, present-day Russia, and anti-Western sentiment. Russian-speaking sectors of social networks in the Baltic states are thus widely used both to continue Russia’s information activities against EU and NATO member countries while cementing its own positive image among the Russian-speaking population of Estonia, Latvia, and Lithuania. Analysis also revealed clusters of clearly active and interconnected ideological users, each of which specializes in the creation (Writers), distribution (Distributors), or consumption (Readers) of ideological information. In addition, there is a significant number of members of “active reserve”, from which the ranks of the above clusters are replenished. It seems that users who create ideological content on a wide range of macro topics do not give any preference to any particular topic; consequently they have no personal desire to promote certain political values or views, which indicates that they might be motivated by non-ideological factors—perhaps even those that are material in nature. Nonetheless, there is a significant—and growing— number of Russian-speaking social media groups and communities in the three networks members of which are based in the Baltic states and which exhibit pro-Kremlin, pro-Russia and anti-Western orientations. They serve as sources of ideological posts that are widely disseminated by active users who capitalize on their connectivity and visibility among the Russian-speaking users of VK, OK and FB in the Baltics.