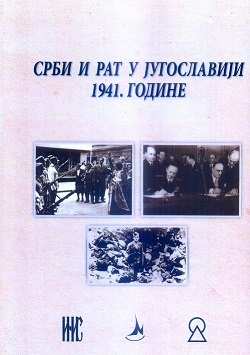 Author(s): Silvija Krejaković
Subject(s): Civil Society, Local History / Microhistory, Military history, Criminology, Victimology, WW II and following years (1940 - 1949), Peace and Conflict Studies
Published by: Institut za noviju istoriju Srbije
Keywords: Kraljevo; Wehrmacht; siege; civilians; massive retaliation;
Summary/Abstract: One of the worst war-crimes committed by the Wehrmacht troops against civilians in the territory of Serbia was the mass retaliation in Kraljevo in October 1941. Authentic, original historical sources (among which temporally closest to the event are: the name lists made by factory and communal administrations on order of the District head on March 24, 1942; lists of the Refugee Commissariat; evidence of the survivors and contemporaries; personal and family memorabilia, documents of the State Commission for Establishing the Crimes of the Occupiers) are kept at local and central institutions. Historical sources as fragments of the past offer a complete picture of the causes of the shooting, forged ideologically by the order of the supreme German command and applied according to the proportions of the Nazi value system in which one German life in Serbia was worth 100 Serbian lives because of the losses the 717 Division of the Wehrmacht suffered from the Partizan-Chetnik attacks; of the consequences of the shooting as each individual victim was reflected on the suffering of his or her family, of the large number of war orphans, of devastated economy… The real picture of the tragedy based on exact historical data was lost among a spate of mythologized views. The date of the shooting – that according to the primary sources and memories of the contemporaries and the survivors, lasted from October 15 to 20, 1941 – was identified with October 14, the day of commemoration. The ideological and political motives were decisive for turning the place of shooting (at first called the Camp Grave-Yard, then, the Grave-Yard of the Shot) into the Memorial Park (1965–1992) with no crosses and names of the shot in the plan of the memorial complex. The service for the dead, synonymous with paying respect to the victims, was replaced in newspaper articles, studies, literary works and posters by the term the October Festivities during the above mentioned years. In the mythical layers, the oldest and the least open to explanations except in scholarly conferences and discussions in small scholarly circles, was the myth of the number of the shot in the Kraljevo camp that varied in newspaper articles and everyday talk between 6.000 and 7.500 victims. In the culture of remembrance based on research, analysis and comparison of historical sources that had been diligently collected and preserved in the Historical archives, in the Institution of the Memorial Park and in the People’s Museum in Kraljevo personalization of the victims was necessary. Through the model of data-base modern historical science has established so far the names of 2.190 hostages shot in the camp. The process of research of the victims – their social, ethnic, age and religious make up and the search for their documents and belongings is permanent practice in the museum. The proportions of the crime against humanity are indirectly to be found in the number of families left with no bread-winner, in the number of wartime orphans, in the destroyed economy, since at least 102 persons under age were shot and since the majority of the hostages were workers and clerks of the then airplane and wagon factories, employees of institutions and schools, in the most productive age between 18 and 55. Apart from the electronic form, the unique notes on identity of every person shot – as unique as their lives had been – are noted in the books of Remembrance in the museum’s permanent exhibition, but also in the project planned for the location of the shooting, on the walls of a chapel.