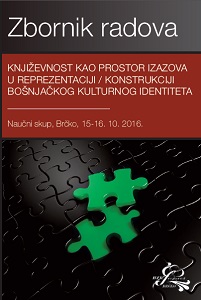 Author(s): Srebren Dizdar
Subject(s): Philosophy, Language and Literature Studies, Literary Texts, Studies of Literature, Social Philosophy, Bosnian Literature, Translation Studies
Published by: BZK "Preporod" Brčko distrikt Bosne i Hercegovine
Keywords: composite nature of literature from Bosnia and Herzegovina; Bosniak literature in exile; cultural identity in diaspora; dual belonging;
Summary/Abstract: Although the composite structure of literature in Bosnia and Herzegovina had developed under rather specific social, cultural and historical circumstances, only, and on rare occasions in the past, some authors from these parts wrtote their works in exile (Habiba Rizvanbegović-Stočević, Arif-beg Rizvanbegović), but the separation from a homeland was the topic that some of its prominent writers from all its constituent segments came back to from time to time (Šantić, Andrić, Šop, La Bohoreta, etc.). It was only during the horrible war events towards the end of 20th century, which had forced not only hundreds of thousands of people to leave their native soil, but also inspired diverse forms of literary activities to emerge in exile. Their fundamental defining element was the attempt of securing and preserving ethnic, cultural and any other form of identity in the new surroundings. The paper tries to find some answers to the basic question posed in relation to a determination of literature in/and from Bosnia and Herzegovina, more specifically in view of its Bosniak component, which has been expresed in the published collections of poetry and short stories, rarely in plays, and in the majority of cases, in novel forms – from Norway, Denmark and USA, as well as some other parts of contemporary world. It points out to the situation in the immediate neighbourhood, nowadays largely referred to as the ‘region’, where some authors have continued to write their works, although they remained deeply connected to the language, culture, custioms and identity of the ethnic background they had come from, despite the fact that, in the meantime, they became citizens of the countries of admission. They all have continued to add a characteristic exile expression to the literary output in these new homelands. A rather specific issue deals with the concurrent belonging to literatures those Bosniak authors contributed to with their works, irrespective if their books had been published originally in the languages of these places, or in their mother Bosnian tongue. The works of Bekim Sejranović, Alen Mešković and Ismet Prcić have been analysed in the paper, together with some other names, as the possible examples of either proving or disapproving the initial hypothesis on the identity duality in the Bosniak or any other literature(s) for that matter.