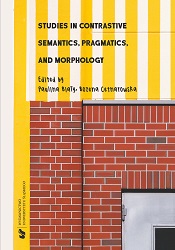 Author(s): Maria Brenda
Subject(s): Language and Literature Studies, Theoretical Linguistics, Applied Linguistics, Semantics
Published by: Wydawnictwo Uniwersytetu Śląskiego
Summary/Abstract: The present corpus-based study analyzes the semantics of two spatial prepositions, near and next to, which encode the concept of proximity and which may be transferred to other nonspatial domains. The research suggests that the semantic structures of the two prepositions are best seen as semantic networks, with the primary spatial senses functioning as their respective prototypes and other related senses as more peripheral extensions. At the same time, an insight into their rather impoverished polysemies in comparison to other spatial prepositions, such as on, in, at, or over, is demonstrated. The question of Polish equivalence is also taken into consideration. English–Polish dictionaries suggest that near and next to may be translated in a similar way, that is, by means of words such as obok, opodal, and w pobliżu for near, and obok, przy, and tuż przy for next to. The present study suggests that those equivalents are, in fact, suitable, however, only for the primary spatial senses of the prepositions under study, while more peripheral senses require other linguistic means to be expressed in Polish.