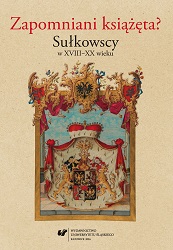 Author(s): Jiří Brňovják
Subject(s): History
Published by: Wydawnictwo Uniwersytetu Śląskiego
Summary/Abstract: The present study is devoted to the heraldic aspects of the social career of a Polish nobleman, Aleksander Józef Sułkowski (1695–1762). For his considerable contribution attainment of the Polish crown Friedrich August II ensured that in 1733 an imperial title of a count was conferred to Sułkowski by Friedrich August II and that the former’s family coat of arms was promoted. Sułkowski’s further advancement in titular ranks was realised in the environment of the Habsburg monarchy where at the beginning of 1752 he purchased the free Upper Silesian estate of Bielsko. Owing to the considerable assistance of the seller, Friedrich Wilhelm, the count of Haugwitz, the head of the directorium in publicis et cameralibus, and the marked support of the Viennese court, which looked after its own foreign policy interests, he was promoted soon after the purchase of Bielsko to the rank of a Silesian prince. At the same time Sułkowski was promoted by the Bohemian queen, Maria Theresa, to the rank of a Bohemian prince and he received an analogous imperial title from her husband, emperor Franz I Stefan. Both instances of promotion referred exclusively to Sułkowski and his primogenital line of inheritance, whose representatives constituted contemporary owners of Bielsko. In 1752 he managed to experience the promotion of Bielsko to the status of a principality, which ensured him and his primogenital descendants the status of a Silesian prince. The Bohemian privilegium further extended the princely title to all legal descendants of Sułkowski, similarly as in the case of the imperial privilegium, which was issued at the same time. Without doubt Sułkowski’s social advancement was fundamentally motivated by the pursuit of the highest social position that could be attained in the contemporary aristocratic community of the Habsburg monarchy. The purpose of this was to ensure the potential advancement of Sułkowski’s eldest son, August Kazimierz, in the highest diplomatic and bureaucratic spheres of the Habsburgs. The conferring of a Bohemian and imperial princely title is accounted for by the content of the 1747 agreement between the Bohemian queen, Maria Theresa and emperor Franz I Stefan about the mutual conferring of Bohemian and imperial knighthood to those people who were Bohemian and imperial subjects at the same time. Although Sułkowski endeavoured primarily to gain Bohemian knighthood for the sake of the advancement of the Bielsko estate, the ensuring of such advancement entailed the analogous attainment of an imperial title. The legal and formal framework of Sułkowski’s imperial and Bohemian titular advancement manifested itself very clearly in the change of his family coat of arms. Its foundation was the Sulima coat of arms, which was an imperial count’s privilege of the year 1733 extended by the count’s coronet in the centre. The black eagle was additionally wrapped by a crancelin, which may be unequivocally interpreted as a derivative of an emblem of a Saxon principality. At least since 1734 Sułkowski began to publicly use a variant of the coat of arms with the complete Saxon emblem. Both may be seen as a clear expression of Karl VI’s as well as of Kurfürst Friedrich Augustus II’s grace. Sułkowski’s coat of arms underwent further radical changes on the occasion of the princely advancement of 1752. The original blazon now had a new background divided into four quarters, whose figures symbolically referred to the issuers of both princely acts – the Bohemian queen and the emperor. Again, the point was about the derivative of landed emblems, which could be used only by landowners. At the top of the coat of arms there was princely headgear, coupled with a traditional princely mantle. Since 1754 this princely blazon was used by all of A. J. Sułkowski’s descendants, whereas the variant with the Saxon emblem on the eagle’s breast in the centre continued to be used. The princely title of the Bohemian privilegium of 1754 was no longer represented in any way in the heraldic composition of Sułkowski’s coat of arms. The princely advancement of Sułkowski’s coat of arms was relatively rare in the context of the heraldry of new Bohemian and imperial knights, for as the princely title was conferred, the estate coat of arms was not promoted, but only peculiarly corrected or improved. Sułkowski’s princely coat of arms does not contain references to the the potential symbolism of Bielsko, the Piast past of this dominion and the municipal symbolism of the city of Bielsko as its capital. The latter aspect was not a commonoccurrence during the conferring of knighthood in the Bohemian lands or in the Empire atall. The double transformation of Sułkowski’s coat of arms and the fact that it is publicallydisplayed reminds us to this day about the extraordinary social position which Sułkowskiattained during his lifetime – first at the Dresden and then at the Viennese court in the contemporary and in the broader framework of the Central European aristocratic community.