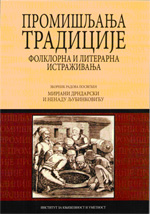 Author(s): Sanja V. Radinović
Subject(s): Music, Serbian Literature, Theory of Literature
Published by: Институт за књижевност и уметност
Summary/Abstract: The beginning of the prehistory of Serbian ethnomusicology is marked by the appearance of two significant musical recordings, realised by means of the late Renaissance mensural notation. They were made by the poet and patrician Petar Hektorović from the island of Hvar, located in central Dalmatia, and included in his famous poem Fishing and Fishermen’s Talk, published in Venice in 1568. Hektorović’s poetic work represents an idyllic travelogue, arising from a three-day cruise he undertook in the company of two fishermen who were the poet’s faithful crew, wise collocutors, excellent singers of the above-mentioned folk songs, and at the same time the first ones whose names (Paskoj Deblja and Nikola Zet) are featured in the history of our science. Some parts of Hektorović’s poem, containing the poet’s comments on the manner of signing and his approach to notation, have become a precious source of additional knowledge about the melodies preserved in this way. Almost 150 years have passed since Hektorović’s notation of these songs (in the original referred to as bugaršćica and pisan) have been attracting the attention of the professional public – of textologists more than of ethnomusicologists, and to a greater extent in Croatia than in Serbia. Various issues have been dealt with in numerous texts, especially in connection with bugarštica, which belongs to a small corpus of the earliest known layer of the epic heritage of Serbs and Croats. In spite of this, many of them remain highly controversial – primarily the question of the origin of the verses and melodies, that is, whether they are of Serbian or Croatian, folk or authorial origin. After a detailed presentation of the confrontational views of the above in Serbian and Croatian ethnomusicology, which have been the subject of polemics for many years, the author focuses her attention on some deeply-rooted fallacies concerning the structure of the poetic and sung texts of bugarštica-type poems. Approaching this issue as an ethnomusicologist – who, as opposed to textologists, always bears in mind the difference between the demelodised and the sung version of the text of a folk poem – the author proves the inaccuracy of certain views advocated by Valtazar Bogišić, the author of a still very influential study on bugarštica-type poems published in the second half of the 19th century. On the basis of numerous arguments, among which Hektorović’s musical notation has a special place, it turns out that Bogišić’s long-sustained fallacy was due to his inadequate insight into the structural role of the so-called addendum, a textual addition of specific character that ends some verses of bugarštica-type poems. Finally, based on discovering the characteristic coupling of verse-type texts and the quasi-stanzaic melopoetic form – which is a significant feature of the South Slavic (especially Serbian) vocal heritage – the author draws the conclusion that this indubitably constitutes a case of a melopoetic expression originating from the folklore tradition of South Slavs.