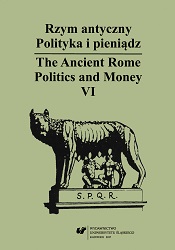 Author(s): Barbara Lichocka
Subject(s): History
Published by: Wydawnictwo Uniwersytetu Śląskiego
Summary/Abstract: When presenting the accomplishments of Polish researchers in the years from 1982 to 2013 concerning money in Ancient Egypt, it is worth recalling earlier studies because they constitute important points on the map of our achievements; they are still discussed in international literature. These include some publications by Stefan Skowronek dealing with the Alexandrian mint and different aspects of its issues during the Roman period until Diocletian’s monetary reforms. His later studies already fall within the time frame of the following research. Altogether, they comprise a list of major publications about Alexandrian coins, primarily about their iconography, also viewed from a synthetic perspective. Alexandrian coins, that is, issues from the time of Roman rule from Augustus to Diocletian, which Giovanni Dattari called Numi Augg. Alexandrini, are marked by unique iconography. Apart from an analysis of selected research questions, Stefan Skowronek presented, in broader terms, the merging of local and Greco-Roman trends, their religious and political aspects. Barbara Lichocka also contributed to the iconography of Alexandrian coins. Among others, she studied the iconography and cult of Nemesis, as well as suggested a new interpretation (as Artemis) of the female figure standing in front of an altar and facing Apollo as depicted on the coins of Antoninus Pius.The archaeological excavations conducted by Polish missions in Egypt forced the necessityto publish new findings. These publications included works by Aleksandra Krzyżanowska (anannotated catalogue of coins from Tell Atrib and articles concerning coins from this archeological site, a research paper on a small group of late Roman coins from Deir El-Bahari) and Barbara Lichocka (studies of coins from different periods unearthed on Kom El-Dikka in Alexandria, a catalogue of Byzantine coins from Marea baths and a publication of coins from Naqlun). Dorota Malarczyk examined Umayyad coins found in Marea. Piotr Jaworski published coins issued in Egypt and found in Ptolemais. Katarzyna Lach provided a general overview of coins recovered from the Polish-American excavations in Berenice. Adam Jegliński drew up a study on an assemblageof coins from Kom El-Dikka in Alexandria and proposed an interpretation of the context. The chemical composition of coins was investigated to a limited extent for some categories of coins from Kom El-Dikka, primarily of those cast during the late Roman period and the few silver/billon coins from the Roman period (Claudius, Nero).The coins unearthed during excavations are often a starting point for further detailed analyses.The topics that were discussed were relevant not only for one archaeological site, but forexpanding the knowledge of money in Egypt, both minted locally and flowing in from otherregions as a result of Diocletian’s reforms. Works which are worth mentioning in this contextinclude Aleksandra Krzyżanowska’s paper on the long period of circulation of Ptolemy VI’s coins and the so-called Arabic-Byzantine coins, and Barbara Lichocka’s discussion concerning the late Roman cast coins found on Kom El-Dikka.An analysis and interpretation of terracotta molds for copying late Roman coins is undoubtedly a subject whose research, conducted indepently by Aleksandra Krzyżanowska and Barbara Lichocka, contributed to a better understanding of manufacturing and circulation of cast coins. The issues of money circulation were not often raised by Polish researchers. Therefore, it is worth indicating the highly-valued study by Andrzej Kunisz on the circulation of gold money in Egypt, based on an analysis of the most important hoards found in Egypt. Andrzej Kunisz addressed, among others, a controversial issue of production of gold coins under Vespasian, which could have been minted in Alexandria. This thread was later pursued by Katarzyna Lach. The earliest issues of coins, from the pharaonic times, were not analyzed in detail. However, two monographs (by Jarosława Bodzek and Mariusz Mielczarek) where they were mentioned cannot be omitted. Ptolemaic coins were not an object of great interest among Polish numismatists either. Nevertheless, there are interesting observations made by the historian Ewa Wipszycka concerning the monetary policy of the Ptolemies, recorded in her handbook of Greek history. Articles by Agnieszka Fulińska and Barbara Lichocka deal with the message conveyed through the iconography of Ptolemaic coins.The scarcity of publications with analytic-synthetic approach is still noticeable. Undoubtedly,it is connected with the lack of good libraries. More studies should be done on coins struck inEgypt and preserved in the collections of Polish museums. We have the catalogues of collections displayed in Cracow (Stefan Skowronek, supplement by Katarzyna Lach), Łódź (Mariusz Mielczarek), Wrocław (Gabriela Sukiennik) and Toruń (Aleksandra Krzyżanowska). Intensification of the study of collections and the necessity to publish catalogues of coins found at archaeological sites are essentials; they will certainly open further research possibilities. Polish numismatists have made their contribution to popularizing knowledge of Ancient Egypt. An outline history of Alexandrian minting in the Ptolemaic, Roman and Byzantine periods by Janina Wiercińska is a collection of three texts, richly illustrated and adapted for a reader who does not possess arcane knowledge of numismatics. It can be said that much credit goes to Polish researchers for exploring topics related to excavations and for analyzing many specific issues. Many studies were published in congress languages and the papers in Polish are often supplemented with a summary in English or French, which makes it possible to share the results with international scientific community. The coinage of Egypt issued under Ptolemaic and Roman rule until the end of the third century, and the coins unearthed in Egypt, including these from the period after Diocletian’s reforms, when the closed currency system was not in effect, also attract active interest of numismatists from other countries, with whom Polish researchers are involved in a scientific discussion.