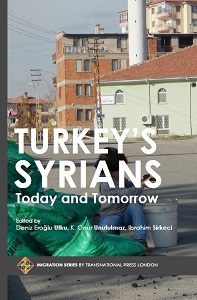 Author(s): M. Murat Yüceşahin, Ibrahim Sirkeci
Subject(s): Politics / Political Sciences, Social Sciences, Geography, Regional studies, Demography and human biology, Migration Studies
Published by: Transnational Press London
Keywords: Syrians; demography; refugees; Turkey; Europe; migration; insecurity; demographic transition theory
Summary/Abstract: At least 6 million 148 thousand Syrians have been uprooted as a result of the crisis and conflict ongoing since 2011 in Syria. As of 6 August 2017, 5,165,502 have crossed the borders into neighbouring countries of Turkey, Lebanon, Jordan and Iraq whilst 983,876 moved further to Europe (UNHCR, 2017). A similar volume of population has been displaced within Syria too. This practically makes Syria one of the worst displacement cases in the history as more than half the contemporary population is displaced. Turkey with a long land border with Syria as well as historic links between populations, particularly in border provinces appeared as a favourite destination for Syrians who escape the conflict. As conflict grew and spread, in 2012 and onwards, a sharp increase in the number of Syrians arriving in Turkey was observed (Yazgan et al., 2015; Sirkeci, 2017a). When Lebanon receiving proportionally the largest share of Syrian movers, Jordan, Egypt, and Iraq have also accommodated sizeable populations seeking refuge. Unlike the early days of the conflict when most movers preferred neighbouring countries, in later years, an increasing number of Syrians destined to Europe. There can be and are many factors moderating this behaviour. We can cite economic opportunities, democratic environment, as well as aspirations and cultures of migration among these factors. Certain political manoeuvres such as the German Chancellor Merkel’s welcoming message in 2015 have also played a role.