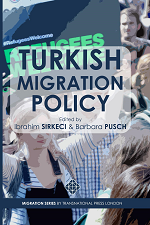 Author(s): Barbara Push, Ibrahim Sirkeci
Subject(s): Politics / Political Sciences, Social Sciences, Geography, Regional studies, Migration Studies
Published by: Transnational Press London
Keywords: Turkish; migration policy; historical perspective
Summary/Abstract: Due to the large-scale migration from Turkey to Europe in general and Germany in particular Turkey has primarily been regarded as a migrant sending country until recently. This image of Turkey characterizes, however,just one aspect of the Turkish migration history. Only since 2011 with the large influxes of Syrians and, there is a shift in the perception of Turkey as a destination country. Throughout history though, Turkey has always been a host country for sizeable inward population movements. There were several waves of population movements in the aftermath of the collapse of the Ottoman Empire: According to Karpat, between 1860s and 1922, around 4million people migrated to Ottoman territories while later, about 1.5 million Muslims “were forced to take refuge in the Ottoman domains” (more or less the territories of modern Turkey). According to the Ministry of Resettlement, then Turkey received a total of 870,000 migrants of whom 400,000 were from Greece, 225,000 from Bulgaria, 120,000 from Yugoslavia, 120,000 from Romania and 10,000 from other Balkan countries.