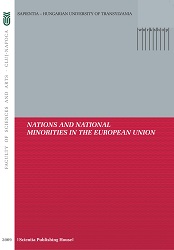 Author(s): László Marácz
Subject(s): Politics / Political Sciences, Language and Literature Studies
Published by: Scientia
Keywords: hungarian language;Carpathian Basin;language law;
Summary/Abstract: Due to the Treaty of Trianon (1920), The Hungarian language is being spoken in eight different countries in the Carpathian Basin, i.e. Hungary, Ukraine, Romania, the former Yugoslav states of Serbia, Croatia and Slovenia, Slovakia and Austria. These countries are neighbouring to Hungary and the territories of these countries belonging to the Carpathian Basin are the following: Slovakia proper, Sub-Carpathia (Ukraine), Transylvania (Romania), Vojvodina (Serbia), Pannonian Croatia (Croatia), Mura region (Slovenia) and Burgenland (Austria). The Carpathian Basin covered the territority of the Old Kingdom of Hungary. The areas mentioned above are inhabited by a mixed population of ethnic and non-ethnic Hungarians. The Hungarians in the territorities neighbouring Hungary are qualified as a ”minority” in the states they belong to. However, in most cases they still form a majority in the areas they live in. Whatever the territorial partitioning of the Carpathian Basin has been or is, all geographers that have studied the Carpathian Basin acknowledge that this area of Central Europe is a geographical, social, cultural and linguistic entity. I refer to excellent studies that are in support of this claim. In fact, the Carpathian Basin is a ’culture area’ in the sense of Smith (1991, 172). Hence, it is motivated to study this area as a unity neglecting the fact that in some cases ethnicity crosses the borders of the Carpathian Basin, as for example, in the case of the Romanians or the Serbs. In this paper it will be argued that Hungarian is still a majority language in the Carpathian Basin. The reason for this is that Hungarians are still in the majority from an ethnic point of view. According to Smith (1991, 11-13), the Eastern European model of national identity is ’ethnic’ in contrast to the ’civic’ model of Western Europe. This has the following two important consequences. First of all, a nation is first and foremost a community of common descent and a member is organically connected to it (cf. Smith (1991, 11)). Second, the place of law in the Western civic model is taken by vernacular culture, usually languages and customs in the ethnic model. That is why lexicographers, philologists and folklorists have played a central role in the early nationalisms of Eastern Europe and Asia (cf. Smith (1991, 12)). Following Smith (1991, 11-13, 20), we will adopt the generalization that in Central and Eastern Europe vernacular language and culture determine ethnic identity and that these features are strongly correlating with national identity. Hence, there is a correlation between being an ethnic Hungarian and speaking the Hungarian language. All ethnic Hungarians speak and use the Hungarian language in the Carpathian Basin. Knowledge and use of the Hungarian language is one of the markers of the Hungarian identity in this area. However, not all speakers of Hungarian are ethnic Hungarians and not all ethnic speakers of Hungarian are speaking the Hungarian language. For example, the Roma sometimes only speak Hungarian, but they are not ethnic Hungarians. Bilingual speakers of Hungarian, ethnic Romanians, for example, in Transylvania might speak Hungarian, but they are not ethnic Hungarians. Some ethnic Hungarian communities, like some of the Csángó communities in Moldavia do not speak any longer Hungarian but Romanian. These communities consider themselves as ethnic Hungarian descendents. Although these cases exist, I will consider them as an exception to Smith’s generalization for Central and Eastern Europe. Observe that Smith’s generalization is only true for the following left-to-right correlation between ethnicity and language. If you are of X ethnicity then you speak X language, but vice versa is not true. Although, the Hungarian language is subject to legal conditions and a restrictive language policy in the neighbouring countries of Hungary, it has received more recognition in a European framework. After the collapse of communism the internal and cross-border public space have become free. For reasons of communication, speakers are free to use the language of their choice. Furthermore, minority languages are being protected by conventions adopted by the Council of Europe, namely the European Charter for Regional or Minority Languages (ECRML, 1992) and the Framework Convention for National Minorities (FCNM, 1995). Both conventions are not integrated into the European Union’s legal framework yet, but it is clear that they will play an important role in the further liberalization of Europe and the Europeanization of Central and Eastern Europe. It is precisely for this reason that Hungarian communities in Central Europe are in favor of a further Europeanization of their region. This point of view conflicts with local nationalist jurisdiction, especially in Romania and Slovakia. However, the nationalist policy towards the Hungarian language can only hinder and delay a free and spontaneous use of the Hungarian language. Because of Europeanization the Hungarian language will strengthen its position in Central Europe, more precisely in the Carpathian Basin where Hungarians have a clear ethnic majority. If this is the course of future development, then Hungarian might develop into a regional communication language, a so-called lingua franca in the Carpathian Basin. This lingua franca will be used mainly in the communication among Hungarian mother tongue speakers in all domains of life.

Book: NATIONS AND NATIONAL MINORITIES IN THE EUROPEAN UNION