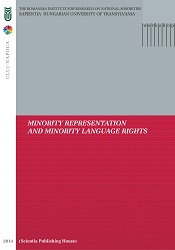 Author(s): Hamit Xhaferi, Nerita Xhaferi, GËZIM RREDHI
Subject(s): Politics / Political Sciences, Language and Literature Studies, Law, Constitution, Jurisprudence
Published by: Scientia Kiadó
Summary/Abstract: Linguistic diversity is a world heritage which needs to be valued and protected. Each linguistic community has the right to use its language as an official language in the community where it lives. The history of the legal rights of the ethnic Albanian minorities in Greece is one form of a flagrant violation of the norms of the rights of the Greek state and also its international rights. The Albanian ethnic minority should have equal rights for education in their native language and to freely practise their religion. In Attica, Beotia, Arta, in the regions of Chameria (Ancient Thesprotia), Preveza, Arta, Ioannina and in the regions of Konitsa, Kastoria and Florina – taking into consideration the number of the population living in various Greek cities –, the number of orthodox Chams (Albanians) exceeds 500 thousand. However, Greece denies their existence in these regions. Arvanites in Greece do not have the right to use the Albanian alphabet (Latin) and they do not have Albanian schools or Albanian books. If Albanian language is spoken, it is spoken only inside the family. The Greek authorities, amongst other things, state that: ‘we don’t see it necessary that Albanians and other minorities should learn their languages, because the languages that they speak are not languages!’ The Albanian language has continuously been despised and ill-treated. The situation with the education in Chameria and in all the regions where Chams live is miserable. In Chameria today, you cannot find a single school in their mother tongue. Greece has always thought that opening new Albanian schools in Chameria will be a big betrayal of the Hellenic state and Christianity. Unlike Albania and Italy, which have opened many schools for the Greek minority in Albania and for the Arbëreshë in Italy, Greece has done the opposite by ending and sanctioning the Cham’s efforts for education in Albanian language.