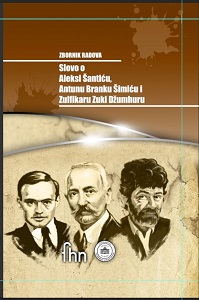 Author(s): Elbisa Ustamujić
Subject(s): Cultural history, Bosnian Literature, Serbian Literature, Culture and social structure
Published by: Fakultet humanističkih nauka, Univerzitet »Džemal Bijedić« u Mostaru
Keywords: Herzegovina; cultural memory; Mostar; political identity; city;
Summary/Abstract: The paper is based on the fact that, within the literary criticism, Aleksa Šantić has been recognized as a poet/bard of patriotic-social engagement, motifs from Muslim life and Mostar, as well as elegiac tones of personal misfortunes. In those social circumstanses (the Austro-Hungarian occupation, the annexation) Šantić’s Herzegovinian identities in patriot-social poetry are being represented as political identities, supported by essentialist valuables: the nation, the space, the epic tradition, myths and religion, which, on the basis of distinction WE/THEY, homogenizes „the identity of resistance“. Herzegovina is an imaginary space of cultural memory, whilst Mostar represents an authentic space of Šantić’s life and a place in which cultural context his constructive identities are being formed. It is a place of encounters with people, recognizable climate and topographic marks, Mediterranean vegetation, urban bazaar and streets, as well as family-patriarchal milieu. Inside that space Šantić has sang/lauded amorous, landscape and elegiac songs, his experiences of Mostar, specific culture of life and sensation of connection and being affiliated. Identifying himself with the people’s mentality, Šantić has transmitted poetic impulses of the city’s soul and spirit