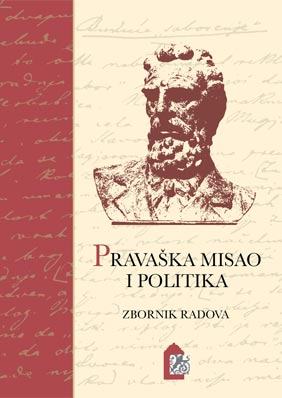 Author(s): Marina Diklić
Subject(s): Politics / Political Sciences, Politics, History, Political history, Modern Age, 19th Century, Between Berlin Congress and WW I
Published by: Hrvatski institut za povijest
Summary/Abstract: Dissatisfaction with the politics of the National Party in Dalmatia, which played an important part in the national awakening in Dalmatia, appeared at the end of the 1870s, and culminated at the end of the 1880s and beginning of the 1890s. At the head of the politically disaffected, those who tended to be especially oriented toward Croatian nationalism and Rightist ideas, was first and foremost Don Mihovil Pavlinović, and after his death in 1887, Don Juraj Biankini. At the end of the 1880s and the beginning of the 1890s, several conflicts broke out among the members of the National Party which led to a change in its name to the National Croatian Party in 1889 and even to a split in the party in 1892. Disappointed by a lack of success in economic and political affairs a group of National Party representatives led by Biankini decided to break from the Representative Club of the old National Croatian Party and form their own club, the Croat Club. At the beginning of the 1890s a process began in Dalmatia whereby all the Rightists and the Rightist oriented groups began to unify into a united Party of Right. The main instigators of the process were Don Ivo Prodan, who led the religious- Rightist grouping, and Dr. Ante Trumbić and Frano Supilo, who led the liberal Rightist grouping. They would soon be joined by Biankini’s Croat club, which took upon itself the task of key organizer, leading ultimately to the unification of all three Dalmatian Rightist groupings and the formation of a Party of Right in Zadar in 1894. The President of the Croat Club, J. Kazimir Ljubić, became the first president of the newly established Dalmatian Party of Right.