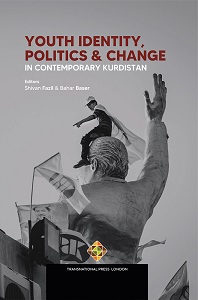 Contributor(s): Shivan Fazil (Editor), Bahar Başer (Editor)
Subject(s): Politics / Political Sciences, Social Sciences, Economy, Literary Texts, Psychology, Essay|Book Review |Scientific Life, General Reference Works, Geography, Regional studies, Library and Information Science, Sociology
Published by: Transnational Press London
Keywords: Peace; Conflict and Violence Series; Bahar Baser; change; conflict; identity; Kurdish; Kurdistan; politics; Shivan Fazil; youth;
Summary/Abstract: Today’s youth are challenging the older political class around the world and are forming new political generations. Examples from South Africa and elsewhere where peace processes were deemed to be successful show signs of youth disapproval of the current post-conflict conditions. Moreover, the Arab Spring witnessed numerous youth movements emerge in authoritarian and illiberal contexts. This book was prepared in light of these discussions and aims to contribute to these ongoing debates on youth politics by presenting the situation of youth in the Kurdistan Region of Iraq (KRI) as a case study. It will be the first book that specifically focuses on the Iraqi Kurdish youth and their political, social, and economic participation in Kurdistan. The contemporary history of the KRI is marked by conflict, war, and ethnic cleansing under Saddam Hussein and the tyranny of the Ba’ath regime, significantly affecting the political situation of the Kurds in the Middle East. Most of the recent academic literature has focused on the broader picture or, in other words, the macro politics of the Kurdish conundrum within Iraq and beyond. There is little scholarship about the Kurdish population and their socio-economic conditions after 2003, and almost none about the younger generation of Kurds who came of age during autonomous Kurdish rule. This is a generation that, unlike their forebears, has no direct memory of the decades-long campaigns of repression. Studying and examining the rise of this generation of Kurdish young millennials—“Generation 2000”—who came of age in the aftermath of the United States invasion of Iraq offers a unique approach to understand the dynamics in a region that underwent a substantial socio-political transformation after 2003 as well as the impact of these developments on the youth population. Pursuing different themes and lines of inquiry the contributors of the book analyze the challenges and opportunities for young men and women to fulfil their needs and desires, and contribute to the ongoing quest for nationhood and nation-building.

Foreword: Youth in the Kurdistan Region and Their Past and Present Roles

Constructing Their Own Liberation: Youth’s Reimagining of Gender and Queer Sexuality in Iraqi Kurdistan

Social Media, Youth Organization, and Public Order in the Kurdistan Region of Iraq

Youth and Nationalism in the Kurdistan Region of Iraq

An Elitist Interpretation of KRG Governance: How Self-Serving Kurdish Elites Govern Under the Guise of Democracy and the Subsequent Implications for Representation and Change

Educational Policy in the Kurdistan Region: A Critical Democratic Response

Making Heaven in a Shithole: Changing Political Engagement in the Aftermath of the Islamic State

Kurdish Youth and Religious Identity: Between Religious and National Tensions