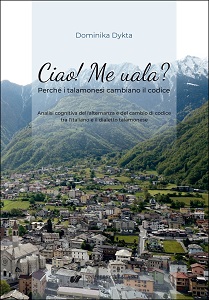 Author(s): Dominika Dykta
Subject(s): Language and Literature Studies, Applied Linguistics, Translation Studies
Published by: Wydawnictwo Uniwersytetu Śląskiego
Keywords: cognitive linguistics; profiling; speech acts; dialect; alternation; changing of code
Summary/Abstract: The aim of the thesis is to analyse, from the cognitive perspective, the phenomena of alternation (alternanza) and changing of code (cambio di codice) in the Talamona language. The choice of Talamonese, which is a local talk, takes into account historical, topographic-demographic aspects, its distance from Italian standard, and the language preservation. Both of this phenomena represent speech acts (atti linguistici) and are examined through the profiling the felicity conditions in particular communicative situations. The profiles that are applied present the Talamonese as a dialect that serves to alternate the codes and to change the code. The first chapter is dedicated to the dialectical study in Italy and in Poland, to the story of the Italian language, and to the variety of different perspectives of dialects relationship between Italian and the dialect with the particular focus on the alternation and changing of code in diglossia and bilingualism as well as placing the dialect in the Italian linguistic repertoire. The second chapter examines alternanza and cambio di codice, both seen as sociolinguistic phenomena and as speech acts. I was inspired by the articles of R. Kalisz (1994), O. Sokołowska (2001) who analysed speech acts cognitively. The analytic method used is that of profiling of the construal of R.W. Langacker (1987, 2009). The analytical part aims to describe examples of studied phenomena collected by means of a semi-structured interview and a sociolinguistic questionnaire. The respondents discussed the problems of dialect, which also emerged from previous sociolinguistic studies. Cognitive analysis of alternation has allowed to distinguish three profiles: functional, that of communicative competence, and habitual. In the part devoted to changing the code the profiles are the following: expressive, habitual, that of communicative competence, and functional. Each profile contains examples where only one of the felicity conditions is profiled. The analysis leads to the following conclusions: (1) the acts of alternation and changing of code in the functional profile are intentional, in the habitual and expressive profile are unintentional, in the communicative competence profile both intentional and not; (2) prototype cannot be established for a concrete profile; (3) most of the examples are code-switching, while only a few examples relate to the code-mixing and loanword. From the analysis we could observe that Talamonese as a dialect of a little town is an important part of Italian culture.