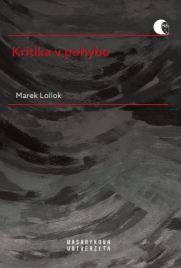 Author(s): Marek Lollok
Contributor(s): Jana Horáková (Editor), Katarina Petrovićová (Editor), Vendula Hromádková (Editor)
Subject(s): History, Language and Literature Studies, Studies of Literature, Recent History (1900 till today), Czech Literature, Transformation Period (1990 - 2010)
Published by: Masarykova univerzita nakladatelství
Keywords: Czech Republic; literary criticism; metacriticism; 90s;
Summary/Abstract: The book deals with the Czech literary criticism and metacriticism of 1990s, primarily in the form in which they have been appearing in literary journals of the period. Its main purpose is to explore the topic contextually as well as to evaluate it from today’s perspective. The book is divided into the eight parts: Introduction; Retrospectives; Anticipations; Postmodernist Criticism; Catholic, Christian, Spiritual etc. Criticism; Disputes over Authenticity, Critical Reflexions and Conclusion. They are relatively autonomous, but mutually corresponding; within these frames the most significant issues of literary criticism and metacriticism of the period are discussed. This approach provides a large scope of various points of view enabling the examination of the subject matter not merely in the strict chronological order but rather in the complex, multilateral (however sometimes overlapping) way. Except of the first and last one each chapter results in the summarizing and concluding résumé emphasizing the main points of the prior partial interpretations and highlighting their most important consequences. The first chapter provides a general introduction into the topic of literary criticism and metacriticism, its terminology, periodization and the overall theoretical background. To the chief concepts belongs the idea of “discourse” in the predominantly stylistic sense (i. e. discourse as interweawing text with context). The structure of the book is grounded in the idea of the synoptic-pulsatory model of literary history (coined by Peter Zajac and Dalibor Tureček), that is to say the understanding literature as a network “in progess” rather than a perfect stationary (categorical) system. In the following two chapters we explore two prevailing tendencies of Czech literary criticism at the beginning of 1990s. Then, relatively a great attention was paid to the matters of the past: numerous participants were looking back into the (not very distant) history, recapitulating and revising the prior development. Later on, the debates about the future of Czech literature prevailed and the specific atmosphere of waiting for the Great Critic or the Great Work of Art was established. In the next pair of chapters we examine two of the most recognizable types (streams) of critical thinking and writing in 1990s: Literary criticism under the influence of postmodernism and Criticism based on Christian belief. The former presents the context of postmodern thinking, mentions its chief representatives and discusses some particularities attributed to postmodernism in the contemporary Czech environment, the latter inquires the metamorphoses of Catholic (Christian) literary criticism, its platforms (especially the journal Souvislosti) as well as some concrete examples of this sort of literary reflection (first of all by Martin C. Putna, the most influential Catholic reviewer at that time). In the fifth chapter we examine the ongoing discussion about so called “authenticity” in literature which was accelerated by the enormous and continuously expanding popularity of literary diaries, memories, documentary literature etc. We also analyze the controversies concerning Jan Lopatka’s extremely critical approach and observe the extensive usage of the term “authenticity” in literary debates and its relevance as a criterion. Additionally we take a deeper look into the long-lasting antagonism between the magazine Tvar and Kritická Příloha Revolver Revue (including their prominent authors Pavel Janoušek and Michael Špirit); moreover, we investigate the most frequent arguments and strategies occuring in these disputes. The sixth chapter comments on some of the concrete reviews dealing with the most important Czech prose works published in 1990s (namely Celý život by Jan Zábrana, Jak se dělá chlapec by Ludvík Vaculík, Výchova dívek v Čechách by Michal Viewegh, Nesmrtelnost by Milan Kundera, Sestra by Jáchym Topol and finally Kniha Kraft by Martin C. Putna). These books and authors belong to the most reflected ones during the period in question. We primarily focus on the general values and methods of the most acclaimend literary critics of that time, however, a number of minor noteworhy contributions are not left out. The purpose of this chapter is to illustrate the previous analysies of metacritical texts by the concrete views into the real “everyday” critical practice concerning particular works of art. In the Conclusion part we put forward a synthesis of what we have described/ interpreted separately. We have identified several prominent topics that have gradually emerged in 1990s’ discussions about literature and literary criticism, such as dealing with the past, new situation of Czech literature after 1989, its suppositional future development, question of autonomy of literature, its relationship to reality, social relevance, “authenticity”, (im)possibility of normative (authoritative) approaches in literary criticism, large gap between the “high” and popular literature and some others. A number of them are still valid and highly topical.