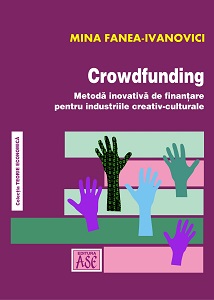 Author(s): Mina Fanea-Ivanovici
Subject(s): Social Sciences, Economy
Published by: EDITURA ASE
Keywords: crowdfunding; film industry; FinTech; creative industries; philanthropy
Summary/Abstract: The more general objective to extend access to finance for innovative companies, start-ups and small and medium-sized enterprises is part of the Action Plan on building a capital markets union, given that 60% of starts-ups survive during the first three years of activity and young companies account for 17% of employment while creating 42% of the new jobs. The Commission considers it to be vital to support such companies pass from the start-up phase to the expansion phase, having in mind stimulating investment that creates jobs and generates enhanced competitiveness of the European Union. In its turn, the European Parliament considers that a the capital markets union would enhance cross-border access to information on the companies looking for credit in order to promote growth of alternative financing models, including crowdfunding.Crowdfunding has witnessed different development levels in the member states of the European Union and, taken as a whole, represents a small share of the total volume of company finance. Nevertheless, besides the main objective of popularising and encouraging this funding method, the Commission is trying to facilitate and increase cross-border crowdfunding because, as a general rule, projects are regionally or locally financed.Still in its early ages in Romania (but also in other states), crowdfunding has relatively recently emerged as an alternative funding method for those companies or projects that do not have enough resources and/or are not eligible for traditional financing. At first, crowdfunding mainly addressed financing needs of projects involving a high level of risk and uncertainty: research-development, innovation and technology, social and humanitarian causes, creative-cultural industries, etc.Given the increasing role of the creative-cultural industries for a smart and sustainable development, as well as their impact on social inclusion, urban revitalisation and regeneration, it is high time to encourage and promote donation and philanthropy in this sector, the purpose of which is to supplement the existing public finance.The case of the creative-cultural industries is all the more interesting as the estimated revenues to be earned from such types of projects have a precarious character, and the ineligibility for banking crediting is justified by the inconsistency of gains. At the same time, the target audience does not represent a certain element. Such are the obstacles faced by unexperienced or young artists and creators and start-ups from other fields of activity.The purpose of this book is to present the multiple facets of crowdfunding as an alternative funding method of economic activities in general and of creative-cultural industries in particular, as well as to enhance awareness about it. According to the Council Resolution dated 16th of November 2007 regarding the European Agenda for Culture, some of the strategic objectives are: promoting cultural diversity and intercultural dialogue, promoting culture as a catalyst for creativity and promoting culture as a vital issue of the international relations of the European Union. Also, the Creative Europe 2014-2020 programme is aimed at enhancing European cultural and linguistic diversity, promoting the European cultural heritage and strengthening the European creative-cultural sector in order to achieve a smart, sustainable and inclusive growth. In this context, the aim of this work is to estimate the dimension of the crowdfunding phenomenon in Romania in the light of the creative-cultural industries and to analyse the opportunity of using this funding method. The first chapter deals with the issue of philanthropy in general and in the creative industries in particular by analysing the main legislative measures and governmental programmes implemented in the European countries. The second chapter presents an ingression in time and space with the purpose of identifying the origins and oldest forms of crowdfunding: Europe in the 18th and 19th centuries, America in the 19th century and Asia in the 20th century. The same chapter reveals the conditions under which the first modern crowdfunding campaigns and the first crowdfunding platforms occurred in the world. The main concepts and notions related to crowdfunding are dealt with in the third chapter. To this purpose both the specialized literature and the main European documents in the matter have been used. The fourth chapter is dedicated to the main valences and advantages of using crowdfunding, with a focus on creative-cultural industries. Additionally, the chapter includes an analysis of the aspects that need to betaken heed of in order to have a successful crowdfunding campaign. At the same time, the chapter advocates the importance of information transparency on crowdfunding platforms. The sixth chapter tackles the main legal aspects of crowdfunding in Romania. In this respect, the progress made in terms of legislating crowdfunding is presented and the accounting impact of crowdfunding operations are discussed. The seventh chapter presents a case study analysing the way in which the Romanian filmmaking industry is financed through crowdfunding.Last but not least, the final chapter analyses the amplifying role of the consumer within crowdfunding campaign. The consumer sometimes becomes a prosumer. The analysis is based, as in the previous chapter, on the filmmaking industry in Romania and its purpose is to highlight the prosumer’s role in successfully completing crowdfunding campaigns.