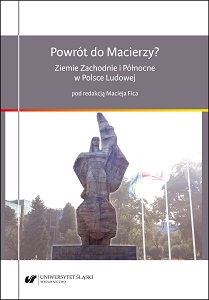 Powrót do Macierzy? Ziemie Zachodnie i Północne w Polsce Ludowej
The return to the Motherland? The Western and Northern Lands in the People’s Poland

Author(s): Maciej Fic
Subject(s): Political history, Social history, Recent History (1900 till today)
Published by: Wydawnictwo Uniwersytetu Śląskiego
Keywords: Motherland; People’s Poland
Summary/Abstract: The Second World War, among numerous modifications in relation to Poland of the twenty-year interwar period caused considerable transformations of its state territory. In 1945, outside of Poland’s borders remained the so-called Eastern Borderlands lost to the Soviet Union — despite the misleading name, the said area encompassed close to a half of the interwar Second Republic of Poland. By way of reimbursement for the said lost, Poland gained from Germany the areas to the west and north of the 1939 Polish state borders. As a whole, this territory amounted to little over 100,000 sq. kilometres, and in 1939 was inhabited by circa 8.5 million people.The following areas were incorporated into Poland: West (Stettin/Szczecin) Pomerania, Lubusz Land, Lower Silesia, the western part of Upper Silesia (Opole Silesia), Warmia, Masuria and a part of Gdańsk Pomerania. The newly incorporated lands acquired many names in historiography and propaganda of the time: the “postulated lands,” “returning lands,” “Regained Lands,” or the Western and Northern Lands (hereafter ZZiP). The nomenclature became part and parcel of history politics instituted by the new authorities, which aimed at strengthening the “Piast Poland” vision (the state’s return to its “proper” national territory), meted out against the “Jagiellonian Poland” (understood as misguided Poland’s eastward expansionism).While planning the content of this book, the authors sought to restrict the contributors’ leeway pertaining to topics, particularly the territorial scope of the research presented. Instead of “vertical” perspective (i.e. presenting various spheres of activities undertaken across the entire ZZiP), the “horizontal” approach was taken, that is, the one showing the specific of the particular country areas comprising the lands in question. Our work is, therefore, a kind of journey through the subsequent, previously mentioned areas. (fragment of the introduction )