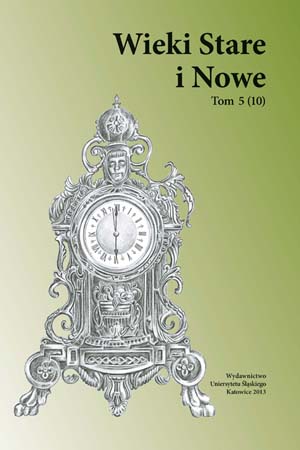 Tekst źródłowy: Śląski Instytut Naukowy w Katowicach w okresie „karnawału Solidarności” (na podstawie posiedzeń Dyrekcji i Kolegium Instytutu)
Sources text: The Silesian Academic Institute in Katowice in the period of the „carnival of Solidarity” (on the basis of the sessions...)

Summary/Abstract: The publication consists of two parts: an introduction and source materials. The introduction shows the origins and circumstances of the formation of the Silesian Academic Institute, and outlines a structural-personal situation of the institute until the martial law, as well as the context of the so called carnival of Solidarity. The selection of sources comes from the collection stored in the National Archive in Katowice, a rich legacy of The Silesian Academic Institute. The sources cover selected protocols of the sessions between August 1980 and 13 December 1981. The materials presented allow for tracing the way the institution appointed as an ideological centre acting to a large extent for the purposes of party authorities, could include the actions or mechanisms against the intentions of the decision-makers from the Voivodship Committee of Polish United Workers imposing the rightfulness of actions, or at least stigmatizing improper behaviours. The very sources allow for discerning the signals of awaiting changes (e.g. the limitation of the omnipotence of nomenclature) on the one hand, and show the attempts to stop the process of liberalization and democratization of life made by a part of environments concentrated around the so called Katowice Forum Party on the other. The work includes the fragments that, according to the author, prove the unique nature of the very period and draw attention to unusual situations having no equivalent either before the events from August 1980 or after 13 December 1981. The sources selected show difficulties the Polish society dealt with In the period In question, them among others being particularly housing problems or decisions on forced emigration. They also prove that 30 years ago there was the period in the history of the Polish People’s Republic in which one could blame a voivode for breaking the law in public, when the authorities were deprived of the freedom to distribute flats and the party activists had to account for their steps made during working hours.