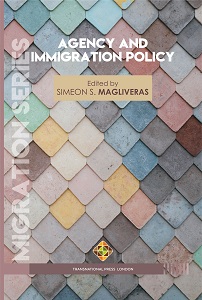 Contributor(s): Simeon S. Magliveras (Editor)
Subject(s): Politics / Political Sciences, Politics, Social Sciences, Civil Society, Governance, Public Administration, Public Law, Sociology, Migration Studies, Geopolitics, Asylum, Refugees, Migration as Policy-fields
Published by: Transnational Press London
Keywords: Agency; Bahrain; immigration agents; immigration policy; Japan; Malaysia; migration; naturalisation; Pontic Greeks, Simeon Magliveras; Singaporean; Sri Lanka; Thailan;
Summary/Abstract: Immigration policy is interesting because seemingly powerless immigrants bare much of the brunt of said policies. Cultural idioms of us/them are unashamedly politicized at the expense of immigrants. Issues such as citizenship, human rights, labor rights, needs for laborer, culture and identity, all are intertwined into immigration policy. Policy, thus, becomes a tool of control and power. Moreover, immigrants and refugees are essentialized in everyday discourse as either hard working labors, or as lazy or immoral groups. They are politicized as barbarous caravans, or simply hordes of otherness. Immigrants are voiceless and at the same time burdened with all the ills of the host society. Much of the time, voices of their contributions are drowned out by the voices of fear and invasion. And this is inadvertently embedded in policy and its interpretations. This book is a selection of work from different places around the globe. It examines immigration and policy from different perspectives. Contributors to this book explore the intention of policies, its causes, and the results of its enactment, to society’s transformation but also it explores the action and agency of the subjects of said policies.

Criminalized and Vulnerable: Refugees And Asylum Seekers in Thailand and Malaysia

The Japanese Asylum Policies: The Informal Asylum of Syrians in Japan

Making Diaspora Policies Without Knowing The Diaspora? The Case of Sri Lanka

Transiting into the Singaporean Identity: Immigration and Naturalisation Policy

Immigration Agents in Bahrain: An Exploration of the Immigration Policy Nexus