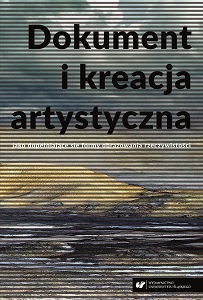 Contributor(s): Witold Jacyków (Editor), Karolina Tomczak (Editor)
Subject(s): Fine Arts / Performing Arts, Visual Arts
Published by: Wydawnictwo Uniwersytetu Śląskiego
Keywords: photography; Digital Photography; pictorialism; certificate; continuous photography; document; Creation; documentation;painting;
Summary/Abstract: The book entitled A document and artistic creation as mutually complementary forms of depicting reality is a collection of authorial texts which in a different and multifaceted way deal with the universal and still troubling relation between a document and creation, signalling at the same time various understandings of these notions. It presents to readers, especially to those interested in contemporary art, up-to-date theoretical considerations and unique effects of artistic activities, both particularly focused on the analysis of documentary and creative specificity of photography but also on other artistic disciplines, including the current heterogeneous post-media art.