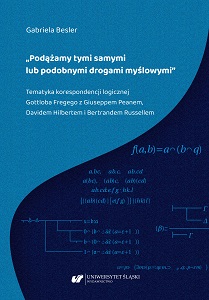 Author(s): Gabriela Besler
Subject(s): Logic, Theory of Communication
Published by: Wydawnictwo Uniwersytetu Śląskiego
Keywords: Gottlob Frege; Giuseppe Peano; David Hilbert;Bertrand Russell;
Summary/Abstract: The book “We followed the same or similar lines of thought.” The subject of logical correspondence between Gottlob Frege, Giuseppe Peano, David Hilbert, and Bertrand Russell consists of four chapters, Preface and Conclusion, Bibliography, Appendix (all the discovered letters of Frege set in a chronological order), and subject and name indices.Chapter one, entitled “Introductory Issues,” discusses Frege’s fundamental philosophical-semantic assumptions: his logicism (inspired by Leibniz’s idea of algebra based on logic), differentiation of sense from reference [Bedeutung] of the linguistic expressions, adequate and disjunctive division of the universum into functions (whose particular type are concepts) and function’s arguments, that is, objects. Apart from that, the chapter also discusses Frege, Peano, and Russell’s foundation for logical notation.Chapters two, three, and four have been devoted to Frege’s correspondence with Peano, Hilbert, and Russell respectively. Each of those chapters has the same structure: a general introduction to a given correspondence, a presentation of the correspondents’ familiarity with each other’s texts, as well as their citings, an enumeration of the extant letters, and a catalogue of the investigated subjects. After that, themes pertinent to a particular correspondence have been discussed in further sections of those chapters. The chapters end with a calendar of Frege’s cooperation with a given correspondent.Chapter two, “Correspondence with Giuseppe Peano,” provides an analysis of the Frege and Peano’s discussion of their logical symbolisms and a number of assumed primitive (i.e., undefinable) terms (signs or symbols). Further, it contains Frege’s and Peano’s records (and understanding) of quantifiers, as well as the related difference between universal and existential sentences. Also, a comparison of records of particular logical formulas from the logic of Frege with the logical formulas of Peano have been provided in this chapter. A concluding theme is the discussion over certain definitions of mathematical operations and conditions that proper definitions should comply with.Chapter three, “Correspondence with David Hilbert,” comprises an account of an epistolary discussion of Frege with Hilbert, which concerns Hilbert’s book Grundlagen der Geometrie and symbolismin mathematics. It contains a controversy over the concept of geometry (geometry based on spatial intuition or an abstract systemwith no interpretation), the structure of its system, the understanding of an axiom and its role in the system of geometry (the axiom is always a truefundamental fact of intuition or a definition of primitive concepts), consistency and independence of axioms, different understanding of the phrase es gibt (there is) and expectations as to the logical symbolism.Chapter four, “Correspondence with Bertrand Russell,” delineates Frege’s correspondence with Russell. It ismost voluminous, most interesting, and substantially most difficult part of Frege’s collected letters. In his first letter to Frege, Russell – referring to Frege’s first book Begriffsschrift – formulated the difficulty that led to antinomy. In a reply, Frege related the difficulty to Grundgesetze der Arithmetik and discovered the possibility of constructing the antimony in his own system of logic, which was to enable to define basic terms of the arithmetic of natural numbers and thus lay grounds for arithmetic based on logic. What is more, other formulations of the antimony put forth by Russell and Frege, the controversy over understanding of the class, a search for fundamental form of a function, and a profound understanding of its domain, various forms of eliminating the antimony in Frege’s system, as well as Frege’s arguments for the necessity to apply the differentiation of sense formreference in linguistic expressions.In the Appendix, the reader will find a chronological list of all the hitherto discovered scientific letters by Frege.Primary sources contain only basic works by Frege, Peano, Hilbert, and Russell, while literature on the subject – other sources that appeared in the footnotes. From all the extensive literary output of Frege as well as a comparison with the abovementioned, I limitmyself to only those references that I consider crucial.