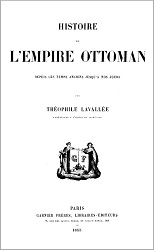 Author(s): Théophile Lavallée
Subject(s): Political history, Modern Age
Published by: CEEOL Collections / Digital Reproductions
Keywords: Ottoman Empire;
Summary/Abstract: The events taking place in the East today (1855!) are the continuation and the consequence of the revolutions which have agitated this part of the world for several centuries. To fully understand the facts which are being accomplished before our eyes, to fully appreciate the mission and the rights of France in the current war, to even prejudge the outcome and the results, as well as the influence that it must have on the destinies of Europe, one must know, not in its details, which are of little interest to the peoples of the West, but in its broad features, its general results, its most important revolutions, the history of formation, of the greatness of the decline of the Ottoman Empire; you need to have a clear idea of the institutions, customs, races, peoples, religions of this empire, made up of so many different elements; even the geography of these poorly known countries must be unraveled. Finally, France has not ceased, since ancient times, even before the Crusades, to have relations, interests and sympathies with the East; at times she played a leading role; it has exercised, at all times, a beneficent and civilizing influence: one must know this history of the relations of France with the Ottoman Empire, a history almost entirely ignored, full of lessons and glorious memories, and which gives, by national tradition, the key to current events. // Such is the object of this book, which is, not the learned, detailed history of the Ottoman Empire, with the tedious account of its palace revolutions and its provincial rebellions, but the succinct account of events Europeans of this history, this history reduced to the facts which interest a French reader, finally, if one can express it thus, a view of the Ottoman Empire taken from France.