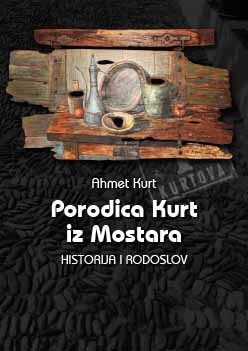 Author(s): Ahmet Kurt
Subject(s): History, Local History / Microhistory, Social history, Modern Age, Special Historiographies:, Theology and Religion, Islam studies, 19th Century, The Ottoman Empire, Between Berlin Congress and WW I
Published by: Ahmet Kurt
Keywords: Bosnia; Mostar; Family; Ottoman Empire; Austro-Hungarian monarchy; History; Genealogy; ulema social class;
Summary/Abstract: After all the research and resources available for Kurt family members from Mostar, on the basis of their position in society then, we can say that their ancestors in the sixteenth, seventeenth and eighteenth century were members of the army of the Ottoman Empire. For carrying out military service they were given tymars i.e. feuds which generated income. After the conquest of parts of today’s Croatia and Hungary, they were received properties in that part of the empire, probably due to their warrior or other merits. They later moved to Lika, Perusic. Their nickname or surname was Kasumović. After taking Lika by Austria they fled to Bosnia. Around 1700, they came to Mostar and took the nickname / surname Kurt. They had several houses in the mahalle Carina in Mostar, where all Kurt family members lived. Thanks primarily to their military merits, they were received tymars which they later, either by purchase and marriage, increased around Nevesinje (villages Kljuna, Sopilja, Bijenja), in West Herzegovina (Duvno, Broćanac Biograci and Široki Brijeg), Stolac (Dabrica and Trijebanj) and in the villages north of Mostar (Potoci, Humi and Lišani, Vrapčići, Goranci, Vihovići, Dobrč, Zijemlja) and south of Mostar (Žulja, Hodbina and Opine). These properties later became hereditary. They used to marry members of the families belonging to the same social class. At the beginning of the nineteenth century, thanks to their incomes and abilities, they gained a place and reputation in Mostar, and gradually transformed into an ulema social class. They accepted the beginning of the industrial era passively. The value of their immovable properties were not invested in the creation of new value. In the period from 1908 to 1965, during the various agrarian reforms, they generally lost their properties, and thus lost a place and influence in the new societies. During the Ottoman Empire they belonged to the ruling class, firstly the military-feudal, and then the ulema class; during the Austro-Hungarian monarchy they belonged to the class of small landowners and religious intelligence. With the establishment of the Kingdom of Serbs, Croats and Slovenes, Mostar Kurt family shared the fate of other Bosniaks, and came in a subordinate position and lost their properties. Some Kurt family members learned trades and became part of the working class, which in Bosnia and Herzegovina began to form between the two world wars. Other Kurt family members were educated and took their places in society according to their professions and skills.