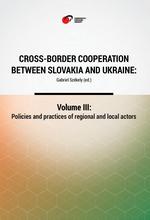 Author(s): Gabriel Székely, Michal Cirner, Irina Dudinská, Vladislav Dudinský, Martin Lačný, Gita Geremešová, Helena Melkusová, Jaroslav Vencálek, Matúš Žac
Contributor(s): Gabriel Székely (Editor)
Subject(s): Public Administration, Methodology and research technology, EU-Accession / EU-DEvelopment, Geopolitics
Published by: Prešovská univerzita v Prešove, Filozofická fakulta, Inštitút politológie
Keywords: Cross-Border Cooperation between Slovakia and Ukraine;
Summary/Abstract: This publication represents the third of a series of four publications that present the findings of the research project “The Association Agreement between the EU and Ukraine and Cross-border Cooperation between Slovakia and Ukraine: Implications and Opportunities”. The research project was implemented by the Institute of Political Science at the Faculty of Arts of the University of Prešov and supported by the Slovak Research and Development Agency over the period of 2016 ‒ 2019 (project no. APVV-15-0369). The set of studies presented in these publications offers analysis of the policies and preferences of regional and local actors who are putting questions of cross border cooperation into practice. Through this analysis, targeted specifically on the regional and local levels, it will be possible to identify, in addition toclear obstacles, the specific opportunities or challenges for Slovak-Ukrainian cross-border cooperation in accordance with the institutional framework of relations between Slovakia and Ukraine on the intergovernmental level and EU-Ukrainian relations on the supranational level. We have attempted to find answers to the question of whether regional actors at the level of the Prešov Self-Governing Region, the Košice Self-Governing Region and the Transcarpathian Region of Ukraine, as well as actors at local level (towns and municipalities, including institutions, businesses and non-governmentalagencies), are able, in terms of their capacities and capabilities, to fully utilize the structure of the political opportunity created by exogenous factors (onthe supranational and national level of relations of the EU and Slovakia with Ukraine) in order to establish mechanisms for cross-border cooperation along the common border. Research into this subject issue also includes (among other things) the essential need to assess existing experience and practice inthe area of cross-border cooperation on the part of regional and local actors on both sides of the border and to examine their perceptions, motivations orstrategies in more detail. Starting from this framework, the project’s research goal was focused on understanding the individual associations between how regional and local actors perceive cross-border cooperation and the border per se. In addition, it is important to know and understand how institutions and individual subjects on the third level mutually and separately prioritize the importance of cross-border cooperation, what influences their perceptions of cross-border cooperation and the border itself, as well as their perceptions of the inhabitants on the other side of the common border. At the same time this is a mapping of those strategies that actors on the regional and local level set for developing cross-border cooperation with partners across the border, as well as towards their own national governments with the aim of achieving the most favourable conditions for the development of cross-border cooperation on the Slovak-Ukrainian border.

THE LEGISLATIVE FRAMEWORK FOR CROSS-BORDER COOPERATION ON THE REGIONAL LEVEL

A COMPARISON OF POLITICAL AND ADMINISTRATIVE COMPETENCES OF REGIONAL AND LOCAL ACTORS (AN ANALYSIS OF THE NATIONAL LEGISLATURES OF SLOVAKIA AND UKRAINE, CONTEXT, AIMS)

PERMEABILITY OF THE SLOVAK-UKRAINIAN BORDER