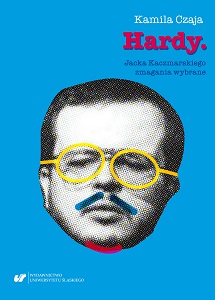 Author(s): Kamila Czaja
Subject(s): Language and Literature Studies, Studies of Literature
Published by: Wydawnictwo Uniwersytetu Śląskiego
Keywords: Jacek Kaczmarski; bard; struggle; defiance;God;
Summary/Abstract: The book consists of analyses devoted to several themes in Jacek Kaczmarski’s work, which, despite their diversity in terms of subject matter and time of creation, can be treated as an expression of various types of struggle – with the political system, with God, with artistic and biographical inspirations. The term “selected struggles” contained in the subtitle underlines not only the fact that the set of possible problems remains open, but also the fact that Kaczmarski deliberately initiated such multiple struggles, which would correspond to the idea of a bard as a contester and a rebel. In the first part (System [System]), on the example of the reception of the piece Mury [Walls], the subject of analysis is the legitimacy of using the term “bard” in relation to Kaczmarski, and the differences between recognising this artist as bard and treating him as the exponent of beliefs of only one political option. After resolving the issue of the author’s appropriation by “Solidarity”, an example of more sophisticated expression of opposition to the system – through the use of the conceptual metaphor SYSTEM is a SCHOOL (among others, in texts such as Przedszkole [Kindergarten] or Nasza Klasa [Our Class]) – is being reflected upon. The second part of the book, entitled Bóg [God], contains interpretations devoted to works that are crucial for various stages of the difficult relationship with God – from the dispute (Walka Jakuba z aniołem [Jacob’s Fight with an Angel]), through the search for a way of reconciliation (Konfesjonał [Confessional]), to the difficult coexistence, the condition of which is the creation of a human image of God other than that of the Old Testament (Śniadanie z Bogiem [Breakfast with God]). The chapter which is focused on the text Diabeł mój [My Devil] presents elements of the previously discussed stages of struggle with God that occur within one song. The third part is entitled Inspiracje [Inspirations] and presents selected examples of Kaczmarski’s use of existential experience and existing texts of culture and their processing in a creative way. The chapter “Sposób z refrenkiem”, czyli o śpiewanej “historii literatury” [“A method with a chorus”, or about the sung “history of literature”], shows how Kaczmarski’s artistic output can be written into various concepts of practicing the history of literature (in its popularizing version). Między muzą a schematem. O Testamencie ’95 [Between muse and schema. On Testament ’95] is an analysis of one genre, the will, as an example of what Kaczmarski can do with the existing genological model. In the chapter Choroba twórcy – tworzywem tekstu [Creator’ Illness as the Material of the Text], the experience of disease is transformed into an artistic message, and the short text Żydzi, masoni i (w zastępstwie cyklistów) bard [Jews, Masons and (in place of cyclists) the bard] proves that the same experience can simultaneously be an inspiration for further attempts to influence society with a song. The opponents change in Kaczmarski’s works, but the permanent features of his artistic legacy are social, existential, creative resistance, defiance, standing in opposition to that which upsets and entering into a dialogue with that which inspires. The struggles that appear in these texts do not end with the death of the author; they constantly provoke new interpretations, and taking up new readings becomes part of other struggles – for the memory of Kaczmarski and his work, so susceptible to appropriation and simplification.